Keirrison to Santos on loan

Keirrison to Santos on loan

FC Barcelona and Santos Futebol Clube have reached an agreement that will see Keirrison de Souza go on loan to the Brazilian club for the new season. Santos will take over paying the player’s wages and his injury insurance.

The 21-year-old striker signed for Barça last summer from Palmeiras before being immediately loaned out to Benfica and then Fiorentina during the campaign. Now he will spend next season back in his home country after the deal with Santos was struck.

Keirrison’s time with Benfica was complicated as competition for places up front was fierce as the club also have Saviola, Cardozo and Nuno Gomes on their books. Coach Jorge Jesús did not show much confidence in the Brazilian and he played in just seven games and a total of 199 minutes without scoring.

Barça chose to send Keirrison on loan to Fiorentina for the second half of the season, but things did not improve that much in Italy as he made eight appearances. In Serie A he scored twice and also added another goal in the Champions League for la Viola. 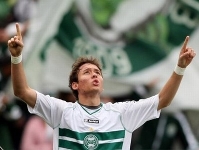