Puyol goal seen before in Madrid

Puyol goal seen before in Madrid

In Durban, Carles Puyol repeated a goal he had already scored at the Santiago Bernabéu on May 2, 2009, the day FC Barcelona beat Madrid 6-2. Like then, Puyol headed home a Xavi cross. 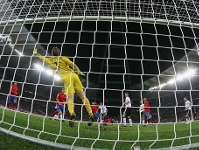 The Santiago Bernabéu history repeated itself for Puyol against Germany in the World Cup semi finals. To add to the curious circumstances, Piqué shielded the play in the same fashion that he had done in the famous Liga victory.

Both goals were also hugely valuable. Against Madrid, the goal helped FC Barcelona moved ahead of Madrid in a league campaign they would eventually win, and the repetition last night was the goal that sent Spain into the World Cup final for the very first time. 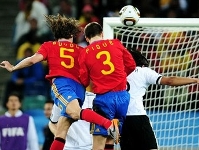 July 7, 2010 in the Durban Stadium is a date never to be forgotten. It was 0-0 in the World Cup semi final between Spain and Germany when Xavi sent in a long cross and Piqué shielded Khedira out of the play and went to head the ball. He didn’t reach it, but up stepped Puyol from the edge of the area to head home and finally beat the solid German defence. As he leapt, he clashed in the air with Piqué, the first man he hugged after seeing the ball go in. 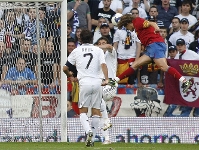 May 2, 2009. Madrid. Santiago Bernabéu. 20th minute of the clásico. Like in Durban, Xavi sent the ball into the area, this time from a corner, lifting his arm to indicate a set play. This time Piqué shielded Metzelder and Higuaín, and once again it was Puyol who bulleted forward to head the ball past Casillas. A delightful piece of football, that will always be remembered for the way Puyol celebrated by indicating the Catalan flag on his shirt. 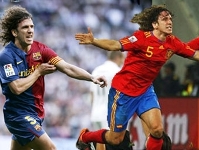 For Barça and Spain, defender Carles Puyol has only ever scored eleven goals. That makes an average of one a season since he first appeared for Barça in 1999 and made his international debut in 2000.

Eight of these goals were for FC Barcelona, six in la Liga and two in the Champions League, while he been on target three times for Spain, once in a friendly against Northern Ireland, once against Estonia in the 2010 World Cup qualifiers, and last night in the semi final against Germany.

Curiously, Puyol made his international debut against Spain’s opponents in Sunday’s final, Holland, in a friendly that the ‘oranje’ won 2-1. That was on November 15, 2000, and Puyol was on the field for 55 minutes.