Chygrynskiy leaves after a difficult year

Chygrynskiy leaves after a difficult year

Dmitro Chygrynskiy is leaving FC Barcelona a year after signing from Shakhtar Donetsk. Despite his talent and obvious motivation, the young central defender never really settled in to the team.

Dmitro Chygrynskiy played his last match for Shakhtar Donetsk on 28th August 2009. Curiously enough it was against Barça in the European Super Cup. Three days later he signed for Barça and made his debut on 12th September against Getafe. 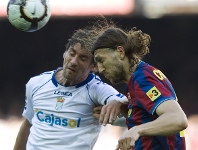 Barça won that game 0-2 but despite this auspicious beginning, Chygrynskiy was destined to have a difficult year at the Club. The first Ukrainian ever to play for Barça featured for just 1071 minutes, 881 in the league and 190 in the Cup. Much of the ‘blame’ for this was down to the excellent form and understanding between Carles Puyol and Gerard Piqué, two of his direct competitors in the heart of the defence.

No chance in Europe or the Cup 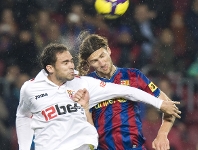 It didn’t help that he was unable to take part in the Champions League - he was ineligible having already played for Shakhtar Donetsk in the qualifying phase. Barça’s early exit from the Cup also meant that there was little chance for him to gain experience there. In the end the relentless demands of the Spanish league programme meant that Guardiola was forced to rely on his more experienced centre halves.

No lack of motivation

However, despite these problems, Chygrynskiy continued to make a huge effort to integrate into the team and the city. After just a few months he made his first statements to the press in Catalan and at all times worked hard in the training sessions. Despite the mistakes – caused perhaps by the enormous pressure piled on his shoulders – he was an exemplary member of the squad. 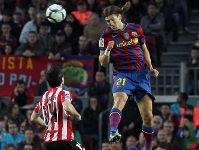 His 14 matches with Barça