Rosell: "There is a verbal agreement with Pep"

President Sandro Rosell has confirmed that the club has reached a "verbal agreement" with coach Pep Guardiola about a new two-year contract with an option for a third.

Sandro Rosell confirmed on Tuesday that the Club will receive 15 million euros for the central defender: “This operation is necessary for the Club, above all to solve some short term cash flow problems. The coaching staff have been very understanding – which we greatly appreciate. The Club’s finances are a priority right now."

He also discussed the situation regarding the renewal of Pep Guardiola’s contract with the Club. “We’ve reached a verbal agreement and now the vice-president for sport and Pep’s lawyer are sorting out the final details”. He confirmed that the deal would probably be for two years with an option for a third. In addition, he confirmed that Luis Enrique would be staying charge of Barça B. 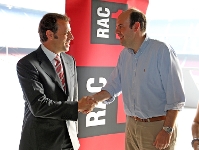 However, he sounded a note of caution regarding the possible signing of Arsenal’s Catalan midfielder Cesc Fabregas: “This has been broadcast here, there and everywhere, and that’s the worst thing that could have happened. For example, Chygrynskiy’s transfer has just come out but we’ve been negotiating it for five days. But the Cesc situation is public knowledge so I’ll try and talk to him when I go to South Africa”.

“It’s all got very complicated because a lot of expectations have been generated on the part pf the seller and that’s not good for Barça. Everyone knows he wants to come here – imagine what he’ll find back at Arsenal!” However, Mr Rosell denied adamantly that there was any possibility of paying 50 or 60 million euros. 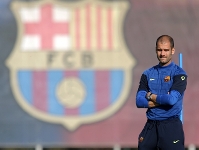 Regarding Rafa Marquez, Mr Rosell revealed. “His representative wants to see us. I don’t know why and it’s not necessarily to do with Marquez, but we’ll see him”. In the case of Ibrahimovic, Rosell denied that the Club had received any offers for the striker and confirmed that Guardiola still counted on him: “Pep will definitely get the best out of him. That’s one of his biggest talents”.

Turning to the recent departure of Touré, he confirmed that the Club and the manager had tried to persuade him to stay: “He didn’t want to. I don’t know if his agent or his brother put pressure on him but the fact is he didn’t want to stay and I’ve always said that if the player isn’t 150% convinced of staying then the best he can do is leave”. As for Hleb, Cáceres, Henrique and Keirrison, he revealed that the Club had received proposals to loan them out for next season. Finally, he denied that the coaching staff had expressed any interest in bringing in Robben, Robinho or Mata.