Gabriel Milito made his comeback from a serious injury exactly six months ago against Sevilla in the Camp Nou. 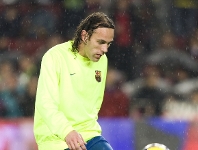 Milito suffered a knee ligament injury in Old Trafford in 2008. His recovery took longer than initially expected and he finally spent one and a half years out of action. 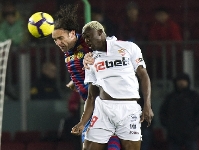 The 60,000 spectators in the Camp Nou gave him a wonderful reception and Milito played 68 minutes in his comeback against Sevilla in the Cup. It was an emotional moment for the player and a sign of his importance to the fans and the team.

In those 68 minutes he was involved in 50 incidents and won back possession on 4 occasions. Unfortunately, Barša lost 1-2 but that didn’t change the fact that a great player had returned to the team. Over the rest of the season he played a significant role in many matches including the 0-2 defeat of Real Madrid in the Bernabeu. 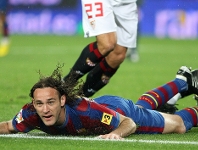 Grateful to the Club

Gaby Milito later made no secret of his gratitude: “I’m grateful to everyone in the Club, coaches, doctors…”. He went on to name individually just about everyone who had played any part in his recovery.

That night, he also told reporters that he had never lost hope despite the seriousness of his injury. “Obviously, some moments were more difficult than others but I always remained hopeful, especially because of the professionals I had around me. I worked hard and kept faith in them”.