Zubi: a point of reference for Guardiola

Zubi: a point of reference for Guardiola

They’re great friends and have tremendous respect for each other. Zubizarreta was captain when Guardiola came into the first team. Now, sixteen years later they’re working together again.

A few months ago Guardiola went on record as saying: "Zubizarreta had the most influence on me as a player. The person who gave me the best advice. Someone I love to bits. I hope he comes back to football because football needs him”. And now Guardiola’s wish has come true. Until recently Andoni Zubizarreta watched Guardiola’s meteoric rise as a commentator. Now in an interview with Barça TV he reflects on Guardiola’s 100 matches in charge.

“Guardiola is a friend"

"Guardiola is a friend. He’s painstaking. Warm. Someone you can trust. Someone you can discuss complex subjects with. He enriches you. We’ve lived many things together and we’re on the same wavelength”. And on being told that Guardiola considers him his biggest influence he explained: “That’s probably because we see football in a particular way, or from the goal the perspective is different”.

“A creator of constant answers" 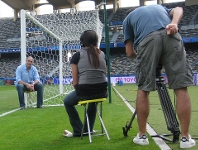 Zubizarreta doesn’t believe in the concept “the best”. For that reason he doesn’t define Guardiola as the best manager in Barca’s history: “Pep is proving he’s a valid manager for Barca by what he’s doing. Pep brings a lot of answers to football beyond the cliché of ‘that’s football’. Thanks to Pep you see that things in football can be done another way. He’s a creator of constant answers”.

“In football, the end is nearly always bad"

Guardiola has already done it all with Barça. The Six Cups and the closest title race in history. But he knows that in football it’s the latest result that counts. According to Zubi: “In football it’s impossible to leave when things are going well, especially in a big club. You know the difficulties but there’s also a personal challenge. In football, the end is nearly always bad. And Pep is already playing with that. That’s why he takes the decisions he does and takes risks. Because if you have to go down he wants to go down with his ideas”. 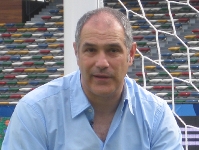 In December, Barça TV asked Zubizarreta if he was in touch with Guardiola. The former goalkeeper told us: “In recent months we’ve only spoken via messages. We try and find a moment to see each other and chat”. Now they’ll be able to talk every day.