President Sandro Rosell has asked for discretion regarding possible new signings. Looking back at the season, he highlighted the 5-0 win over Madrid, the triumph at Wembley and the recovery of Abidal. 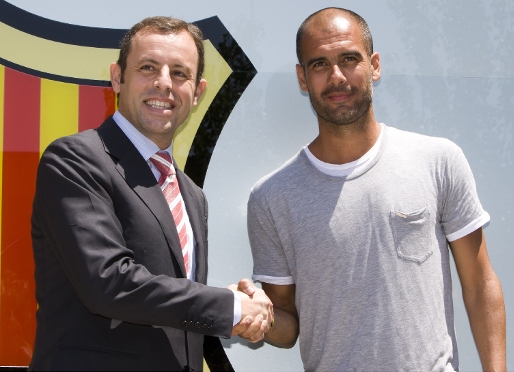 After making his institutional statement, Sandro Rosell turned to sporting issues. “It is an honour to be president of the club. Especially now, after the most titles ever in a year in club history.” Asked what he’ll remember most, Rosell said “the 5-0 win over Madrid that was seen around the world, the win at Wembley, because it was our fourth European Cup, and when Abidal played again at the Camp Nou”.

He also said that the hardest decision was that to sell Ibrahimovic. “It was very difficult, but I don’t doubt that it was a great decision.” As for self-criticism, he remarked that “the pending issue is probably improving communication. We’ll work on it. We have done a lot of things until now but perhaps we should have spent more time explaining them … I also made a big mistake by holding a charity sweepstake”. 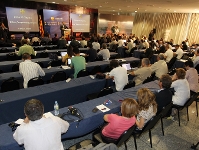 But the pressmen were hungry for information about potential new inclusions in the first teams. “It is not in our interest to talk too much about signings” he insisted, but despite calls for discretion, he could not prevent the name of Cesc Fabregas coming up yet again. “Who wouldn’t want to come to Barça? I suppose Cesc wants to, like most people, but I don’t what’ll happen. If he is interested, then we will act rationally. We aren’t going to go pushing the boat out too far.” In his opinion, the Arsenal midfielder is worth “less than 40 million.”

As for how much the club might spend on new players, Rosell said “the ideal thing would be too observe the business plan, which is to put aside 45 million a year plus sales. If that’s not enough to give the coaches what they want, we can advance some of the money budgeted for the following year”. He also insisted that the young players groomed at La Masia will only leave “on loan or with an option to repurchase”.

He also spoke about the adjustments to the budget to be invested in other sports teams. “Their competitiveness will not be affected” he said. “Prices are only rising in football, in the elite, because of the influence of teams like Chelsea and Manchester City. There is deflation in other sports and we know that through good management we can build teams that are just as, if not more, competitive on a lower budget. Because our competitors will have to reduce their budgets even more”.

“We had a debt of 532 million and the fiscal year will close with one of 483. Reducing the debt by 50 million and still producing sporting excellence is not easy. We have shown that you can be austere and still be very competitive” he said with pride, and thanked his directors for helping to do that. “Our work will involve thinking about the club in general, and it is already in a better state than how we found it. And we will do that through decisions that the people won’t always understand”.