Barça gave a footballing lesson at the home of football tonight. Guardiola’s team claimed the title back with an exhibition of football never seen before in the final. The Club now have four European Cups and are the envy of the world.

Guardiola promised that his players would deliver and they certainly did at Wembley tonight as they turned on the Barça style to see off one of the best teams in the world, Manchester United, who were helpless against the tide of footballing brilliance that Barça showed.

It was Wembley that was the scene for another great success as this Barça, who combine tradition and modernity made the passage from Cruyff’s team’s win at the grand old Wembley to Guardiola’s victory at the new stadium. From romanticism to the avant-garde in football –it’s taken just 19 years for Barça to make that journey!

Into the European pantheon

Barça’s win takes them up into the pantheon of European greats, with four European Cups to their name. Four titles that truly do justice to a Club who have raced to their titles under Johan Cruyff, Frank Rijkaard and Josep Guardiola – three coaches who have given continuity to the Club’s success with their way of understanding the game.


But it’s been Guardiola who has made most of the formula invented by Cruyff. Proof of Guardiola’s commitment to the Club’s philosophy is the fact that seven of his starting players in the last two Champions League finals have been products of La Masia. He has also built a solid defence for his attacking players’ brilliance to sit on and brought out the very best form his stars with his empathy and understanding. He’s also spent hours and hours studying the game, the opposition and his own players’ abilities and that helps explains his phenomenal success – 10 titles as a manager in just three years. It’s this tenth title that has proved the qualitative leap for Guardiola - as he has become the only Barça manager to win two Champions League titles and at just 40, he has become the youngest ever manager to lift the trophy twice - beating José Mourinho’s previous record.

Guardiola’s success has also put him alongside Sir Alex Ferguson as the leading coach in Europe- just like the Scot, Guardiola embodies the values of a Club and his teams always have the stamp of their manager’s commitment to the attacking, attractive style of play that has become synonymous with Barça.

Players are the cornerstone

For all Guardiola’s success though, it’s the players who have also, as the boss would be the first to admit, been the cornerstone of the team’s success. Messi, Iniesta, Xavi, Villa, Pedro, Piqué... all the names that every youngster aspires to emulate right now. Above all though, it’s Messi who has delivered week in and week out, with an astonishing 53 goals this season, with tonight’s his 12th in the Champions League, a total never before achieved in the competition.

Ferguson predicted “the game of the decade” and tonight’s final has confirmed Barça’s position at the top of contemporary football - a win against a team who have rivalled Barça over recent years and that give it an importance that the fans’ mosaic before the game: “We love football” perfectly sums up. 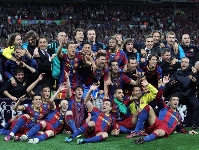