Thiago: “We came out too relaxed”

Thiago: “We came out too relaxed”

Thiago Alcįntara, who scored Barēa’s only goal at Anoeta on Saturday, believes the team “came out too relaxed” for the second half and that allowed Real Sociedad back into the game to take the three points. 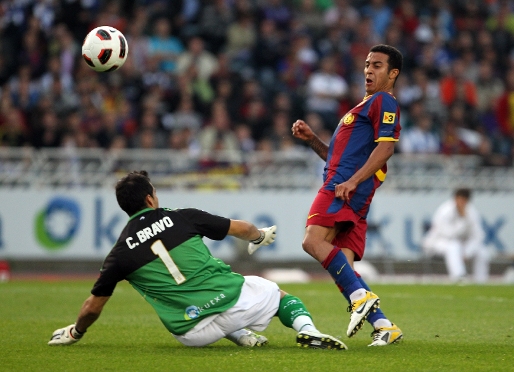 Back in training on Sunday

The squad will be back in training on Sunday at noon at the Ciutat Esportiva Joan Gamper, where they will have a session behind closed doors. There will be no press conference after the session.
Although he could be pleased with getting on the score sheet himself, Thiago Alcįntara knows that that scoring means nothing if you don’t get the points –“the goal is just a side story, the important thing was to win”.

Pep Guardiola had warned leading up to this game that all the matches left to play would be tough, especially against teams who are struggling to maintain their top flight status and Thiago commented: “we leave feeling hurt about the defeat. We couldn’t do it. We were up against a team who were fighting to avoid the drop and in the second half we came out too relaxed and without the attention needed”.

“We knew it wouldn’t be easy and in the end they took the three points”.

“These are difficult games against teams who are fighting relegation and in the second half we maybe lacked that spark we had in the first 45 minutes”.

“I’d never played at left back before, it was something new for me, but I felt comfortable there”.

“We have a very big game on Tuesday and we know Madrid will come looking to turn the tie around”.

“I really don’t know if it was a penalty or not, I couldn’t see it too well. I nearly stopped it, but couldn’t quite do it”.

“Now we need to get our strength together for Tuesday”.

“A draw would have been fair, but in football a lot of times, fairness doesn’t matter”.

“They played with a lot of intensity and the goal lifted their morale”.