World press hails the football of Barça and Messi

Newspapers in Catalonia, Spain and the rest of the world have expressed their admiration of FC Barcelona and their two-goal hero at the Bernabéu, Leo Messi. 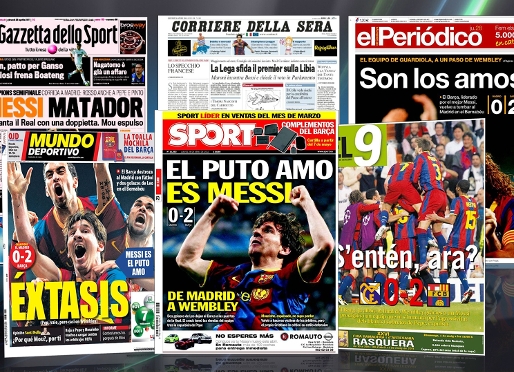 More info
FC Barcelona have once again won over the world’s press after their 2-0 win in the Champions League first leg. For example, in Argentina, Leo Messi appears on all the front pages. “Look at what’s Real, incredible second goal from Messi against Madrid”, says ‘Olé’, and ‘Clarín’ headlines with: “Madrid fall at his feet”.

On this side of the Atlantic, Italy’s ‘La Gazzetta dello Sport’ speaks of a “Divine Messi” and ‘Il Corriere della Sera’ of how: “Barcelona ‘kill’ Real. Super Messi”. In França, both ‘France Football’ and ‘L’Équipe’ were amazed by the Barça number ten. In the UK, ‘The Telegraph’ reflects the tension on the pitch, while Portugal’s ‘A Bola’ tells how “Barcelona beat Real Madrid with two from Messi”.

“Messi is the bloody boss”

As for the Catalan sports press, ‘Mundo Deportivo’ describes “Ecstasy”. “Messi is the bloody boss”, says ‘Sport’, in reference to Guardiola’s pre-match comments. “Do they understand now?”, asks ‘El 9 Esportiu’, with a picture of the Barcelona players celebrating one of the goals.