Pep Guardiola gave Jose Mourinho’s comments about him short shrift at tonight’s pre- match press conference and also insisted that Barēa would go into the game at the Bernabeu: “proud to defend style of play”.

Guardiola replied to the Madrid boss’s earlier comments by declaring:“since he has chosen to to talk about me, I’ll do the same - tomorrow we’ll face each other on the pitch at 20.45. He’s won his games off the pitch and I’ll give him his personal Champions for that - just take it home and enjoy it. We can come up with plenty of examples too, but there’s no end to it, so tomorrow we are simply going to go out onto the pitch and play. I don’t want to compete with him in a press room –he’s the boss at that – a magician and I don’t want to play at making insinuations about him all the time”.

“We can’t fight his media supporters ” 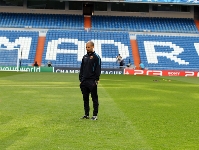 Guardiola’s comments came in reply to Mourinho’s complaints about the Barēa manager’s observations after the Spanish Cup final: “I’m not going to justify my comments –I simply congratulated Madrid after the final. If you think that his allegation that I always complain about the refs is true after you’ve all heard me over the last 3 years, well there’s nothing I can do. Off the pitch, against his media supporters, there’s nothing we can do to fight that”.

Guardiola’s disgust was heightened by the fact that the two worked together for four years when the Portuguese man was at Barcelona. The boss also referred to Sergio Ramos’s comments: “I saw them. It’s something his club told him to say. I’ve seen it before with Mourinho, he did it at Chelsea and now he’s doing it here”.

Confidence in the squad 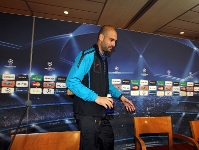 Turning to the game itself, Guardiola confirmed the injury to Andres Iniesta and explained: “we hope to have him back for the second leg. It may change the way we go into the game – we’ll have to see. Maybe Madrid will finish with 10 men, but we will start with 11. I’m confident about the players we have. We are coming here proud to defend our style of play, with 12 home grown players and set to face a team in the semi finals who have 9 European Cups and seven great forwards”.

Guardiola called the fourth successive semi final appearance of the Club: “a gift” and went on to forecast: “a very tough tie for both teams. It’ll be like the Inter game last year, the recent league game and the Cup Final. I’ve come here plenty of times and if you come to defend, they’ll destroy you. You can only dominate them by playing”. Finally, Guardiola commented: “I’ve never seen such an aggressive Madrid team”, as well as revealing: “the grass on the pitch is still long, but that’s what there is and we will go out and play on it”.