“Most of all, we want to play football”

Mascherano: “Most of all, we want to play football”

In the Santiago Bernabéu pressroom, Javier Mascherano has said before the Champions League showdown with Madrid that “we want to speak about football and play football. It’s what we do”. 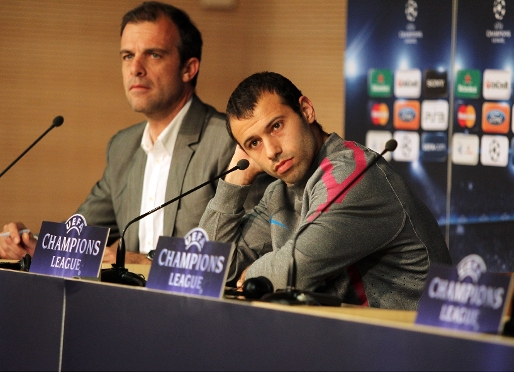 The FC Barcelona player is getting tired of the stories the press is generating around this crunch encounter, saying “people speak less and less and about football and more about things that have nothing to do with football. It’s an uncomfortable situation for me. Spanish football should be proud that two of its best clubs are so close to the Champions League final”.

Mascherano spoke clearly “people are feeling very tired at this stage of the season, that is important, especially those that are playing in three competitions. But at this stage tiredness doesn’t count. It is time to bring out some extra motivation and press on, play well, have a good game and prepare for the return leg. No more than that”.

Keys to the game

Asked about footballing issues, ‘El Jefecito’ said “there are many factors that will decide who plays the final and who does not. Little decisions you make, little details, a shorter or longer pass in these games is more important than other things … Therefore we will need plenty of concentration throughout tomorrow’s game and we’ll need to be ourselves when it comes to playing football.” He then added, in reference to the cup final, that “just because we have lost a game, doesn’t mean we have to change everything”.

Despite the importance of the 5-0 win in Barcelona, the draw in Madrid and last week’s Copa del Rey final, according to the Argentinian “those games will have no repercussions on the two Champions League matches. Madrid did things better in the cup final and that’s why they won. We also had our chances, for example, with the disallowed Pedro goal”.

On what Pep Guardiola has said about that incident, Mascherano said “our manager was talking about that, about how we could have won the game. I am sure he didn’t say that about the two centimetres because he was criticising the referee at Mestalla, just that Barça could also have won the cup”.

Finally, Mascherano spoke about his being a ‘utility’ player. “I’ll play wherever the boss tells me. Now I’m playing further back because of injuries and what happened to Abidal. When I came to Barcelona, I said I was here to collaborate in anything the team needs me for. If I have to play as left back, I’ll do it” he concluded.