Spanish League Round Up Week 33

Spanish League Round Up Week 33

Both Valencia and Villarreal lost at the weekend to give the chasing pack a glimmer of hope with Bilbao, Seville and Atletico Madrid all won to keep up the pressure, whilst Espanyol’s challenge is slipping away. 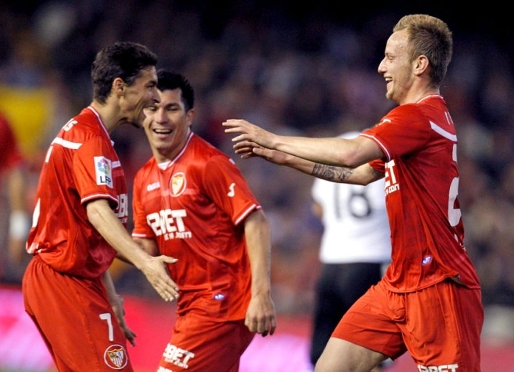 Dubai based Royal Emirates Group announced this weekend that they have bought 99% of Getafe and club President Angel Torres revealed the Arab investors were planning to put 90 million Euros into the club. It’s the third sale of a La Liga club to foreign investors this season, following the purchase of Malaga and Racing Santander by Qatar and Indian interests.
Valencia received a sobering thrashing at the hands of a Real Madrid team full of fringe players, whilst Villarreal went down 3-2 at Seville to leave Emery’s team 12 points clear of fifth place Bilbao on 63 points and Villarreal fourth on 57. Bilbao did their European chances a world of good with a 2-1 win in the Basque derby over Real Sociedad, whilst Seville’s win keeps them two points behind Caparros’ team in seventh. Atletico Madrid are sixth, as they put any Llevant hopes of European football to the sword with a 4-1 win at the Vicente Calderon.

Biggest ever home defeat for Valencia

The 3-6 defeat to Real Madrid was the first time Valencia had ever conceded so many goals at home as Higuain(3), Kaka(2) and Benzema made their own bids for a first team spot and demolished the league’s third place team. Late goals from Jonas and Alba couldn’t hide the gulf between the two teams, but Valencia know that they need just one more win to ensure Champions League football next season and 9 points to guarantee third place. Villarreal will perhaps be less disappointed with their narrow 3-2 defeat to Seville. In a sometimes feisty game, Rakitic, Soldado and Romaric scored for the hosts with Marchena, who was later sent off, and Rossi replying for a Villarreal side who rested a number of players ahead of this week’s Europa Cup semi final.

Atletico Bilbao took the points in the Basque derby with a 2-1 win and are now just 6 points behind Villarreal and with a six point lead over eighth placed Espanyol, who they play next week, they have virtually guaranteed some kind of European football at San Mames next season. Espanyol’s 1-0 defeat at Sporting means they have the third worst league record in the second half of the competition and have not won since early March – all of which leaves them four points off the European spots and with games against Barça, Valencia and Seville, as well as Bilbao in a tough looking run in, their hopes of making the Europa League look increasingly slim. In contrast, Atletico Madrid are enjoying some good form and their 4-1 win over Llevant (with 2 goals from Kun Aguero) means they’ve scored 11 goals in their last 4 home games.

Things are looking pretty glum in Pamplona with the defeat at the Nou Camp, combined with Malaga’s 1-2 win in Santander and Zaragoza’s point against Almeria sending Osasuna into the bottom three, with 35 points, at just the wrong time. Malaga have taken 13 points from their last six games and Julio Baptista scored his third goal in two games to help them overcome Racing and move onto 36 points, 1 behind Racing and 1 more than Osasuna, whilst Zaragoza’s 3 points from beating Almeria 1-0 leaves them level with Malaga and deepens Almeria’s problems as they sit bottom, 10 points off safety. Hercules are just 2 points behind Osasuna after their 1-0 win over Deportivo, who on 38 points are far from clear of the struggle themselves, alongside Getafe(37), who lost 2-0 to Mallorca, and Real Sociedad(38).