Iniesta: "We will find the strength from somewhere"

Iniesta: "We will find the strength from somewhere"

Andrés Iniesta feels the team is able to get a good result from their trip to the Bernabéu on Wednesday, which should move them that much closer to the Champions League final at Wembley. 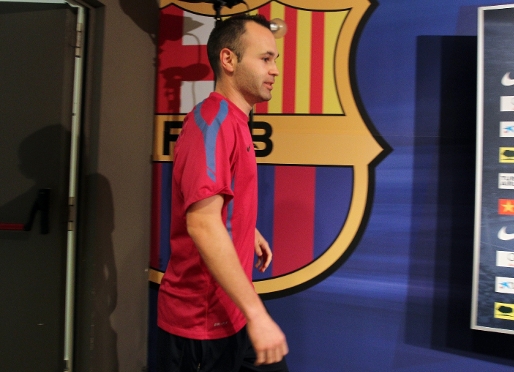 Free to play at the Bernabéu

Andrés Iniesta can play at the Santiago Bernabéu on Wednesday after UEFA announced that it would not be extending the player’s suspension for his yellow card against Shakhtar. On this incident, the Barça man said “it would have set a very ugly precedent for me to have been given a two match suspension just because they couldn’t take a free kick. Worse things have happened”.
Iniesta considers that under Guardiola, Barcelona have done more than enough to show that they have good reason to feel optimistic about continuing their European campaign, and also commented that at the start of the season “we would all have settled for being where we are in the league, being in the Champions League semi finals and playing the Copa del Rey final”.

And he insists that this is not the moment to dwell on the sorrow of what happened in the Copa del Rey final or the latest injury problems. “We have to press on with what we’ve got … we have to find strength where there is none … the players are fine, and we are focused on what we have ahead of us. And what we have ahead of us is something very nice indeed to focus on”. 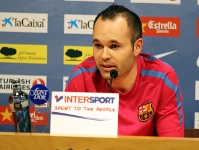 As for Wednesday’s game plan, Iniesta said “we know how to do things right and know how to counter the good things about Madrid … we have to be solid at the back and have to attack well in order to win the game and score goals.” Naturally, the main objective is to get a good result to boost their chances in the return leg at the Camp Nou.

“It will be tough and difficult”, admitted the midfielder. “But we have a positive attitude and are very excited to know that we have come so close to playing in another final”.

Wembley on their minds

Iniesta scored the winner two years ago against Chelsea at Stamford Bridge to put his team in the Champions League final in Rome. But scoring another crucial goal is not his priority right now. “It would be a dream to play at Wembley. I don’t mind if I don’t score, or if I don’t even play, as long as we get to that final”.