Alves: “In football, you get new chances”

Alves: “The nicest thing about football is that you get new chances”

Dani Alves said after the game that “that’s football … we didn’t take our chances and they did. They scored a goal more than we did. But I think we can come back with our heads held high. We’ll have other chances.” 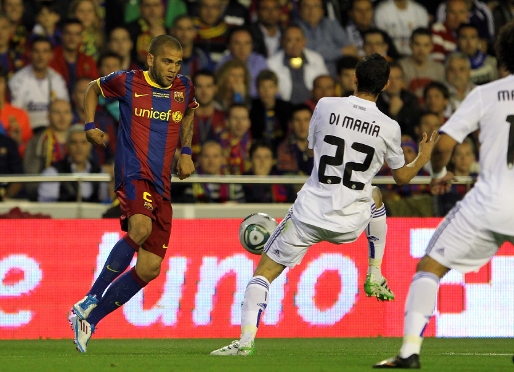 Adriano Correia was substituted in the 118th minute by Maxwell, and has damaged the abductor in his right knee. The full back will be subjected to more extensive tests today Thursday.

Pinto and Maxwell took the doping test after the game, and both passed.
Speaking just after the game, the Brazilian added that “the nicest thing about football is that you get new chances” in clear reference to the forthcoming Champions League semi final in which Madrid and Barça will face each other yet again.

Villa: “We have to digest this however we can”

David Villa said that “we had hoped to win the cup. We have to digest this however we can and think about the very nice month we have ahead. We’re a bit angry right now, but there’s a lot still to come.”

He felt the team recovered well after a poor first half. “We found it very hard to play in the first half. They didn’t let us play our game. In the second half and extra time, we were better and had chances, but they scored on the counter attack.”