3 of the 4 new players have a cup title

Villa, Adriano and Afellay, 3 of the 4 new players have cup titles

Of the four new signings this season, three have already won a domestic cup. Villa did so with Zaragoza and Valencia, Adriano twice with Sevilla and Afellay with PSV. 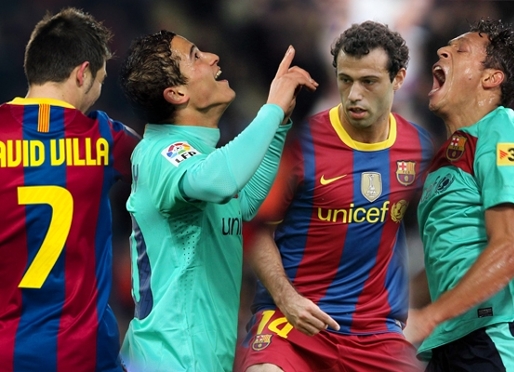 The new signing with the most Copa del Rey final experience is David Villa. He has won the tournament twice before, first with Zaragoza and then with Valencia. With the former, he won the cup by beating Real Madrid 3-2 after extra time in the 2004 final at the Olympic Stadium, Barcelona, and he scored one of the goals.

Four years later, Villa got his hands on another winners medal, this time wearing the Valencia shirt in a 3-1 win over Getafe at the Vicente Calderón.

Adriano two titles but no finals

Like David Villa, Adriano has won the Copa del Rey twice, but the Brazilian full back didn’t play in either of Sevilla’s finals in 2007 or 2010 due to injury. So, he was in the stands as his team won 1-0 against Getafe at the Bernabéu, and then again at the Camp Nou last season for the 2-0 win over Atlético Madrid.

Barça’s newest signing, Ibrahim Afellay, has also won the cup, but in his case in Holland. That was in the 2004/05 season, his second at the PSV Eindhoven, when he was in the same team as former FCB stars Cocu and Van Bommel.

Javier Mascherano is the only one of the four newcomers who has never won a domestic cup for any of River Plate, Corinthians, West Ham or Liverpool.

He and Afellay are also still waiting for their first titles as FC Barcelona player. Villa and Adriano were already in the squad in time to celebrate the Spanish Supercup victory earlier this season, but the other two were not.