On April 5, 1990, goals by Amor and Julio Salinas meant FC Barcelona beat Madrid in a cup final for the third time, and Mestalla witnessed the birth of the Dream Team. 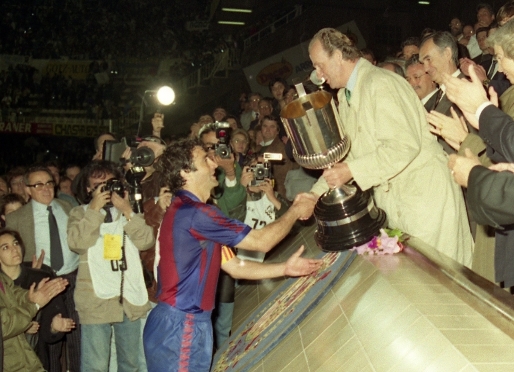 Madrid were flying high at the time of the 1989/90 cup final. They had just won the league for the fifth time in a row, while this was the chance for FC Barcelona and new manager Johan Cruyff to salvage something from the season. Goals from Amor and Julio Salinas late in the game did just that. 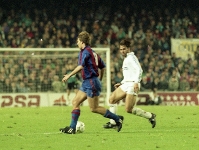 Guillermo Amor remembered the match on Barça TV’s ‘Histňries de la Copa’: “It was a very useful win. We had achieved nothing and they were saying the manager might get sacked. It showed that we were able to beat Madrid after they had won the league five times in a row. After that game, we became the dominant club”. Curiously, the manager was considering substituting Amor shortly before he scored the opening goal.

Rexach confirmed that he and Cruyff came close to closing their jobs: “We were on thin ice and winning was a bonus that meant we went into the next season feeling a bit more confident”. An incredible Barça actually went on to win the next four league titles.

Like the other finals against the old enemy in 1968 and 1983, it was a tough game. “All three finals were really hard”, said Amor, while Andoni Zubizarreta, who started at Mestalla, adds that “in the final, Hugo Sánchez injured Aloisio and he was replaced by Serna while Hierro was sent off for two yellows. It was still a contact sport”.

Like any clásico final, everyone remembers the nerves and tension before and during the game. “They are very special games”, they say. Wednesday will be the same.