Did you know... about the clásico?

Did you know... about the clásico?

The Santiago Bernabéu is the venue tonight for the first of four clásicos in 18 days. There is a host of trivia associated to the game and the following are some of the juiciest nuggets. 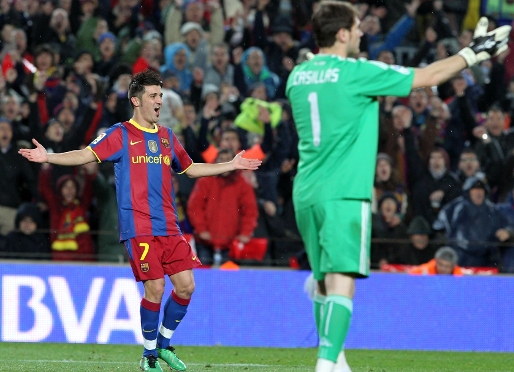 ► First ever clásico in 1902 → Barça and Madrid met for the first time in the semi finals of the Copa del Rey. Barça won the game 3-1. Since then they have played in 209 official matches, with 82 wins for FC Barcelona, 42 draws, and 85 wins for Madrid.

► 25th game of the century →This is the 25th meeting of the sides since 2000. Barça are on top with 9 wins compared to 8 for Real Madrid. Seven clásicos have ended in draws since the new millennium started.

► Best ever Barça streak against Madrid → FC Barcelona have won the last five clásicos, their best ever run. All have been under Pep Guardiola, who has won every Madrid match as manager of Barcelona. Another in tonight’s game would equal the run of six wins for Madrid between 1962 and 1968.

► 16 goals for and 2 against → In the last five games with Madrid, Barça have scored 16 times, to just two for the all-whites.

► Battle of goalscorers → Messi and Cristiano Ronaldo, both on 28 goals, are joint top scorers in the league. The Argentinian has scored 48 goals this season in all competitions and has scored 7 goals and made 4 assists in games with Madrid over the last five seasons.

► Pedro going for 3 in a row → Pedro Rodríguez is the only player who scored in both the last two clásicos. He was on target when the Catalans won 2-0 at the Santiago Bernabéu last season, and also in the famous 5-0 victory earlier this season.