League runs since the 5-0 result

Following the 5-0 result at the Nou Camp in November, Barça and Real Madrid have continued to dominate La Liga, with Guardiola’s team containing the euphoria and Mourinho’s able to steady the ship following that big defeat. 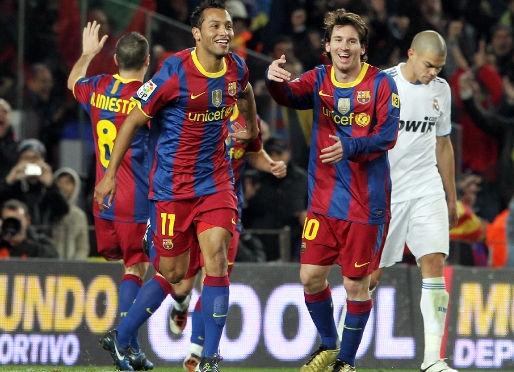 Records since the 5-0 result

MADRID        14    2    2        39     11
It’s gone down in the history of the game now -29th November, the Nou Camp and Barça thrash Real Madrid 5-0 in their first league meeting of the season. That win took Barça top and they have stayed their ever since, but in their favour it has to be said that Madrid have not thrown in the towel and have continued to occupy second place behind Guardiola’s men and try to hunt them down.

Barça didn’t let the euphoria of the win distract them and Real Madrid soon showed they were able to bounce back from such a humiliation, with Guardiola taking his team to Pamplona the following weekend to beat Osasuna 0-3 and Madrid seeing off Valencia at the Bernabeu 2-0.

Since then Madrid and Barça have dominated the title chase, with the Catalans leading the way with the better football and greater consistency, whilst Madrid suffered a number of slip ups –of the 18 league games played since the 5-0 win, Barça have not lost once, whilst Madrid have been beaten twice. Barça have come through potentially tricky trips to Valencia (0-1), Seville (1-1) and Villarreal (0-1) and run up a big win away to Espanyol (1-5) and a home win against Atletico Madrid (3-0).

Real Madrid have also seen off the league’s big guns, beating Villarreal 4-2 and Seville 1-0 at the Bernabeu for example, but have come unstuck against some of the less fancied teams, such as Sporting who beat them in Madrid and Osasuna who also overcame them in Pamplona.

Barça have that eight point lead in hand, but both they and Real Madrid have made the league into a two horse race for the title in a season which Barça are still on course to beat the record for the highest number of points won.