19 players off to Villarreal

19 players off to Villarreal

Pep Guardiola has named 19 players for the trip to Villarreal. 16 of these are from the first team, including Messi and Bojan, and the others are the reserve team’s Montoya, Thiago and Jonathan dos Santos. 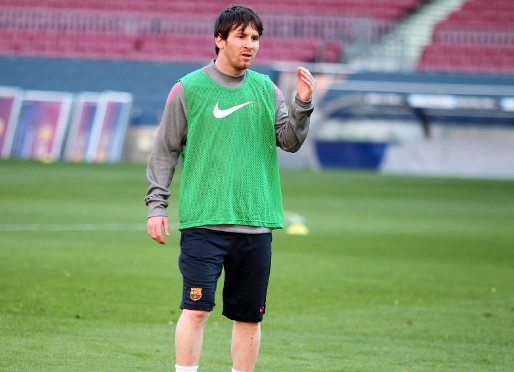 Valdés, Pinto, Alves, Milito, Piqué, Mascherano, Keita, Sergio Busquets, Iniesta, Messi, Bojan, Villa, Jeffren, Afellay, Adriano, Fontŕs, Thiago, Montoya and Jonathan dos Santos.
On Friday evening, the players met at the Camp Nou for the final training session before their league fixture on Saturday night (22.00) at Villarreal. Guardiola opted to leave the Ciutat Esportiva for the day and use the stadium instead, and the session received a welcome spectator in Éric Abidal as they prepared for a crunch game under somewhat unusual circumstances. 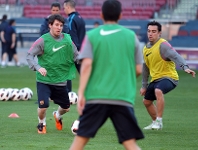 Leo Messi is included in the squad after the club’s doctors declared, following extensive tests on Thursday, that he has not suffered any kind of muscle injury. Bojan is also in the side, having recovered from a first degree sprain in his right ankle.

Maxwell still has a groin strain and has been left out of the team that travels to Villarreal as a precautionary measure. Pedro is also troubled by injury, in his case in the pubis, and will also stay in Barcelona.

So, the FC Barcelona manager has decided to bring on board the B team’s Montoya, Thiago and Jonathan dos Santos.

Also missing from the squad is Xavi Hernández, who is suspended due to accumulated yellow cards. He was given permission to skip Thursday’s training session, but was back today with the rest of his colleagues. 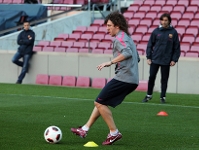 Puyol on the pitch

It has been several weeks since we saw Carles Puyol on a football pitch, but he was there today. The FC Barcelona worked out in isolation with some of the club physios.

Barcelona will be travelling to Villarreal by train. They will be leaving the stadium for Sants station at 10.00 to catch a train that leaves at 10.30. They should get to Castellón around 12.40, from where they will transfer by coach to their hotel.