The Club’s international contingent are still away and with three players still injured, Jeffren in the gym and Keita arriving late to train, Guardiola began this week’s first training session with just two 1st team squad members -Adriano and Pinto-. 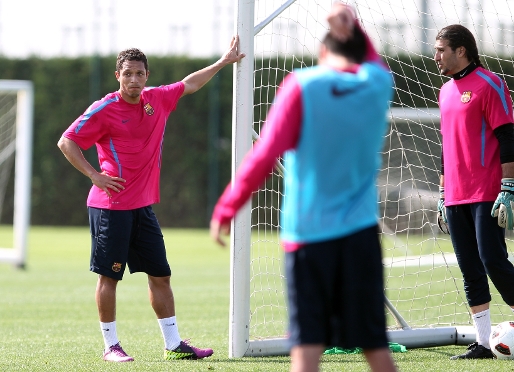 More info
After a three day break, Pep Guardiola welcomed back what is left of his squad for training on Pitch Number Two at the Ciutat Esportiva Joan Gamper this morning, but with only Adriano and Pinto available, he needed to call on 10 B team members to complete the session - Oier, Víctor Vázquez, Ilie, Saúl, Tello, Carles Planas, Bartra, Sergi Roberto, Carmona and Abraham. 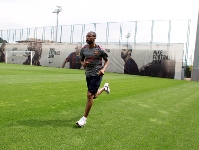 Jeffren didn’t take part in the session – preferring to work out on his own in the gym, whilst Seydou Keita, who has been back in Mali, missed his connecting flight in Paris and came straight to training from the airport, missing the start of the session.

Both Pedro and Maxwell worked apart as they try to get back from injury, as did captain Carles Puyol, who trained on his own.

Bojan arrived back in during the session, after coming off injured in Spain’s under-21 game on Monday, in which Montoya, Fontŕs and Thiago also played. Bojan was examined by club doctors who confirmed a grade 1 sprain of his right ankle.

The squad will be back in training on Wednesday at 18.30 at the Ciutat Esportiva Joan Gamper, when Guardiola should be able to count on his international players. The first 15 minutes of that session will be open to the media and at about 17.30, Dani Alves will hold a press conference - his first appearance in front of the media since he signed his contract renewal last week.