Barēa look to the future

Barēa look to the future

The success, fantastic style and human quality of this squad has led the Club to ensure its members are on long term deals at the Nou Camp to guarantee the stars of the best team in the world will be here for a few years yet. 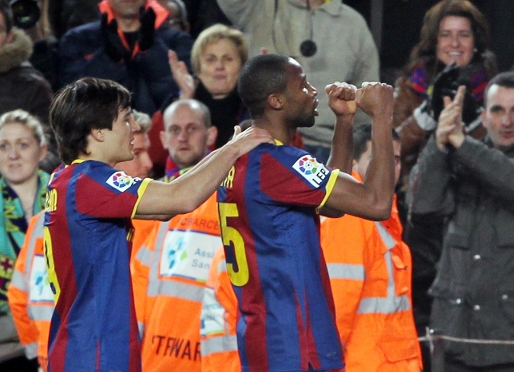 When things are working well, it’s important to look after them and make sure they continue. The Club is well aware of that and are determined to make sure that the team stays together for the next few seasons. Dani Alves’ new deal is just the latest contract renewal in a series that means that the fans can look forward to seeing this team putting on the style for quite a while yet.

Dani Alves became the seventh squad player to sign up until 2015 this week, joining Iniesta, Piqué, Pedro, Bojan, Sergio Busquets and Afellay. As for the best player in the world – well the Barēa fans can sit back and enjoy Leo Messi for a while just yet, as his current contract runs until 2016.

Playing for Barēa makes any player proud and the aim of any player at the Club has to be to stay on – that’s why Puyol and Maxwell, whose contracts run out in 2013 and Xavi, Villa, Keita and Adriano, who are signed up until 2014, all have clauses allowing them to prolong their contracts for a season or two longer.

Four recent deals and two more on the horizon

Busquets, Bojan, Keita and Dani Alves are the players who have met Sandro Rossel to sign new deals since he became President and the next players due to sign on the dotted line are Abidal (whose contract last till 2012) and Pinto (2011).

It’s not just the players who are set to put in a few more years at the Club, boss Pep Guardiola has always insisted on a rolling one season contract and he has already committed himself to the Club for the 2011-12 campaign.