Back to work with Adriano

Back to work with Adriano

The few players available to Pep Guardiola were back in training on Thursday after their day off yesterday. Training with the B team, the squad welcomed back Adriano who had been working out apart from the rest of the group this week. 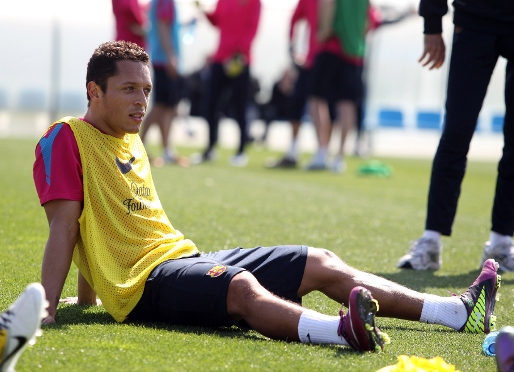 More info
Dani Alves was the latest absentee after he joined the Brazilian squad to play Scotland in London at the weekend. The Brazilian, who signed a new deal this week to keep him at the club until 2015 , may have been missing, but his compatriot Adriano was out on Pitch Number 2 at the Ciutat Esportiva under Pep’s orders after a few days of working out on his own.

Once again with the B team

With so many first team squad players on international duty, Guardiola and the five players available Pinto, Keita, Jeffren, Bojan and Adriano– as well as Fontŕs, trained with the B team.

Meanwhile, Pedro, Puyol and Maxwell continued to work on the recovery process from their respective injuries.