Bojan Krkic, scorer of Barca’s second goal against Getafe, acknowledged that "I need games like Getafe to continue believing in myself and feeling important to the team". 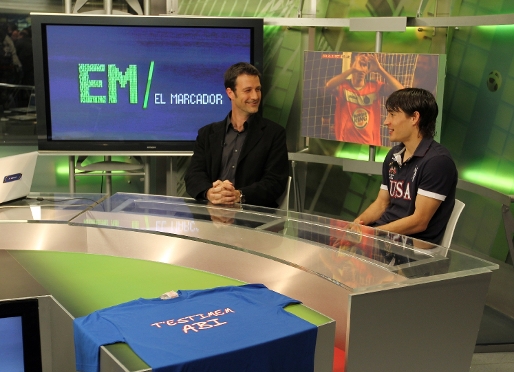 Apart from the show of support for Abidal from the players before the game, in the 22nd minute, the French player’s shirt number, the public gave him a standing ovation, "It’s great that the fans, as well as supporting the team, also applaud individual players. At the time of the standing ovation I could appreciate the applause, because we had the ball controlled in defense and I could watch how the fans paid homage to Abidal. It was really emotional".
In an exclusive interview for the Barça TV program ‘El Marcador’, Bojan Krkic wanted to share with viewers the joy of having scored for the second consecutive match and maintaining his good form: "I'm very happy. It’s been the perfect night. It was a game both myself and the team needed. Being able to pitch in and help my teammates with a goal was great for me”.

Bojan became the youngest player in the club’s history to reach 100 league games, on Saturday: "I get goose bumps when I realise that I’ve reached 100 league games, even more so in a team like Barça. I'm very proud of the work done up to today".

Against Getafe, Bojan scored his fifth goal in the league having started in only six matches, a statistic that shows that he’s not forgotten how to score: "I’m very pleased, especially in recent games, where I’ve been lucky enough to score. It’s very important get regular minutes on the pitch, and even more so for a striker. Now I have confidence in myself and feel really good physically".

Very grateful to the public

Bojan confessed that "one of the factors that has helped me to reach 100 games and not to lose hope that I can play in this team, is the fans in the Camp Nou. I have always felt really loved by them and that gives me the strength to keep on going", Bojan said.

With regard to the team that Barça will face in the quarterfinals of the Champions League, Shakhtar Donetsk, Bojan said: "It will be a tough tie. Once you reach the quarterfinals, all the rivals are very tough. We’ll try to get a good result in the home leg so that we can be more relaxed in the second game".