The motivation of a safe pair of hands

The motivation of a safe pair of hands

Despite winning so many team and individual titles, Valdés says he is as motivated as ever to do his best for Barça, and claims the team is to be thanked for the many successes that they intend to repeat. 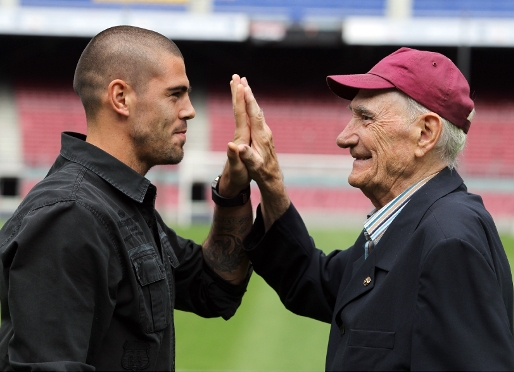 Against Sevilla on Sunday, Víctor Valdés equalled the legendary Antoni Ramallets’ tally of 288 league appearances for Barcelona. Now he only has to catch Andoni Zubizarreta, who played 301 games.

Ramallets had already said in October’s edition of the Barça Magazine which brought together the past and present of Barcelona goalkeeping at the Camp Nou. “Records are there to be broken. I happy that it should be to a lad like Víctor”. Five months on, and against Getafe, Valdés will be able to become the second most used Barça goalkeeper ever in the league, with 289 outings.

The way things are going, Valdés won’t take long to get to 301 league games, the same number as the current director of professional football, Andoni Zubizarreta, who kept goal for Barça between 1986 and 1994. “For me, Zubi, Ramallets and Sadurní have set historic standards in goal for Barça. They defended our shirt for many years and have all my respect”, said Valdés.
After letting in just 13 goals in 25 league matches, Valdés is well on course for his fourth Zamora Trophy, and third in a row. Having also won so many team titles, he is now consolidated as one of the best goalkeepers in the game and an absolute guarantee between the FC Barcelona sticks.

In an interview given to Canal + Sweden, the BBC and Al Jazeera, Valdés spoke about his motivation not just to be a good goalkeeper, but also in other facets of life. “I go to train every day in search of new knowledge, and it’s all thanks to the manager we have. I have to appreciate where I live, what I have, my family … It is a case of adding things up and remembering the great times I have had celebrating titles with the fans, and working hard to win even more. That is our motivation”.

Spanish league among the best in the world

Mourinho being at Real Madrid, claims Valdés, has not meant there is any more rivalry between them and FC Barcelona. The FCB stopper said that their rivalry “is purely sporting … Mourinho is a coach who generates a lot of media opinion. That’s how he works and we have to respect that. I think there will always be rivalry with Real Madrid whether Mourinho is there or not … the local players at this club intensely experience every win we get against the all-whites.”

Valdés accepts that “the time will come to look for new challenges … Although I can’t imagine myself wearing any other shirt than Barça’s, I know what I am like, and I know the day will come when I’ll want to go off in search of new challenges, to get to know new cultures and new forms of football.”

Finally, the Barça goalkeeper spoke about his experiences representing the Spanish national team. “I have to thank Vicente del Bosque, who gave me a late call-up for the World Cup. I did all I could to help the team in every way. I think all players should do their little bit for the World Cup cause. I was very pleased to get to go. Of course, any professional always wants to get to play, but I consider myself part of the group and if I have to do other jobs, then I’m delighted to do so”.