Barēa astound the world once again

Barēa astound the world once again

The vast majority of the press again lauded Barēa’s fabulous football against Arsenal. Messi's genius for the first goal captured the attention of much of the foreign media. 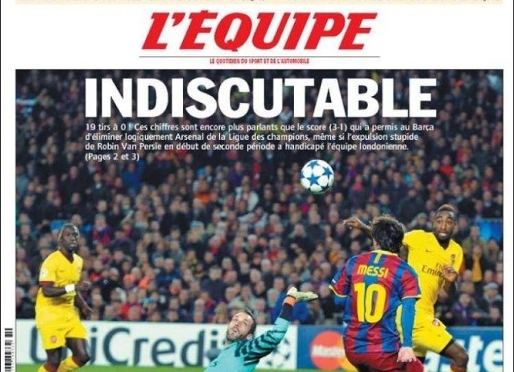 The Champions League match between Barcelona and Arsenal, which was broadcast by TVE1 for the whole of Spain, had an audience of almost 10 million viewers (9,893 million), or an audience share of 47.4%. The game, which was the most watched match this season, was viewed at one time or another by 18,850,000 TV spectators, and the golden minute was at 22.20, with 11,825,000 and a 52.4% audience share.
One of the leading newspapers in the world of sport, the French 'L'Equipe', devoted its entire front page to FC Barcelona’s win over Arsenal which sealed their passage to the quarter-finals of the Champions League. With the headline 'Undisputed' the daily recognised Barēa’s superiority on the pitch, and the way they looked for the win throughout the match. It highlighted the stats of 19 shots on goal by FC Barcelona to 0 by Arsenal, reaffirming the quality of the Barēa team.

The sports papers published in Catalonia - 'Mundo Deportivo', 'Sport' and 'El 9 Esportiu'-echoed the great European night at the Camp Nou. The 'Mundo Deportivo' headline was 'A step towards Wembley!" and wrote below that "Barēa shackled Arsenal, who only had one shot and complained about the referee". With a 'Great Barēa', 'Sport' highlighted the figure of Leo Messi, who 'led the triumph like a champion’. 'El 9 Esportiu' opened the headline with 'This is football' and mentioned the suffering experienced over the 90 minutes.

For their part, Spain's sports newspapers also spoke about the Barēa game. 'Marca' headlined with 'Super-Messi paved the way for a Barcelona side that again played against 10 players’, while the newspaper 'AS' wrote that 'The expulsion of Van Persie marred the Barcelona exhibition’.

Much of the general press also opened with the Barcelona exhibition. 'La Vanguardia' spoke of ‘A dream win. Barēa suffered to overcome Arsenal, but managed to take a step closer to Wembley’. 'El Periódico de Catalunya' headlined with ‘An epic game in the Champions League', while the newspaper 'Ara' stated on the front page that there had been ‘Suffering but into the quarter-finals’.

Some newspapers criticized the little football played by Arsenal. 'El Paķs' headlined with ‘Barēa put out Arsenal who didn’t have one shot on goal’. El Mundo' wrote ‘Barēa defeats an Arsenal lacking ambition’, and the newspaper 'Pśblico’' headlined with 'Barēa unlock Arsenal and go through to the quarter-finals’.

The British press submit to Messi 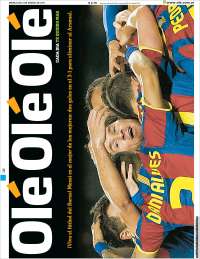 The UK papers didn’t use the referee as an excuse, but simply praised Barēa’s football. 'The Daily Telegraph' headlined with 'Arsenal were hypnotised by the magic Messi' and 'The Guardian' opened with 'Messi, too good for Arsenal’.

Other well-known sports newspapers in Europe like 'Corriere dello Sport' did not hesitate to highlight the performance of Leo Messi and lauded his magnificent goal. ‘Watch the incredible Messi goal’ is the headline on the front cover.

Obviously, Argentina's newspapers devoted a lot of attention to the match between Barcelona and Arsenal. ‘Spectacular’ is on the front page of 'Ole', where you can see a 'Long live Barēa’s football! Messi is the best of the best '. And the newspaper "Clarķn" wrote 'Another gem from Super-Messi. He scored a fantastic goal for Barēa in the Champions League’.