Before the game, Carles Puyol will receive a cheque for 100,000 euros from UEFA after being named captain of the 2010 Team of the Year by users of uefa.com. He will donate the money to the Red Cross. 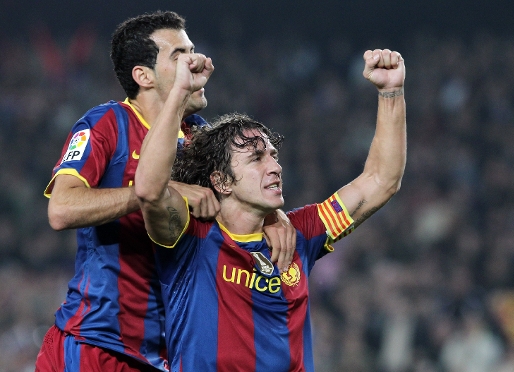 Six Barēa players in the uefa.com Team of the Year

The FC Barcelona centre back got 230,000 votes for the captaincy of the 2010 Team of the Year. The advisor to UEFA president Michel Platini, William Gaillard, will present the cheque to Puyol just before tonight’s crunch Champions League second round second leg between Barēa and Arsenal. The first team captain will donate the money to the International Red Cross Committee.

This will be the fourth year in a row that the money awarded to the captain of the uefa.com Team of the Year has gone straight to one of UEFA’s oldest associates, the Red Cross. The money will be used to help with a project for the physical rehabilitation of land mine victims in Afghanistan.

Speaking to uefa.com about giving the money to the Red Cross, Puyol said “it is a huge honour to have been voted captain of the uefa.com Team of the Year. I am lucky because I don’t just play football for my health and because I have two good legs. I am happy to make this contribution to people less fortunate than myself, and I hope it can help make their lives better in some way.”

Meanwhile, the Red Cross director of financial resources and logistics, Helen Alderson, said “Carles Puyol doesn’t just give us financial support but also moral support, which is very important because he has a lot of fans in Afghanistan”.