Villa: “The day had a happy ending”

Villa: “The day had a happy ending”

David Villa, who was returning to the club he represented for five years, knows how important tonight’s win at Mestalla was for the club’s challenge to win the league championship. 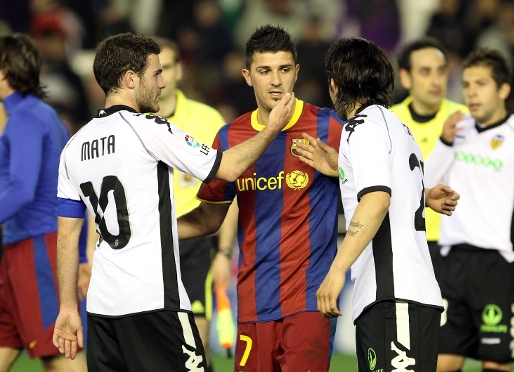 Arsenal won 5-0 against Leyton Orient in their FA Cup fifth round replay, thanks to goals from Chamakh, Bendtner (3) and Clichy. Wenger’s side will now face Manchester United in the quarter finals at Old Trafford. That will be on March 12 at 17.15, four days after the Champions League second round second leg at the Camp Nou.

Meanwhile, the first team returns to training on Thursday at 12.00 in the Ciutat Esportiva. The session will be behind closed doors. Defender Gerard Piqué will be speaking to the press after the match.
Although he had to go to court this morning in Avilés (Asturias), Villa arrived at midday in Valencia to give it one hundred per cent against his former club. The Barça striker said he was pleased “to have been able to play with the team” and didn’t feel that the morning’s events had affected him in the slightest because he had arrived at the hotel at two o’clock. Ultimately he was delighted that the day had ended so happily.

Villa played for Valencia for many years, so he was well aware that it would be a tough match for Barça. After it had finished he said “we are going away happy because it’s a difficult ground to win at … we have managed to deal with a vital match.”

Barça will go to sleep knowing that they are 10 points ahead of Madrid, who have a game in hand that they’ll play tomorrow against Malaga. But there is still a long way to go, and Villa said that “as long as we win our games it doesn’t matter what they do.”

Valencia is clearly a special place for David Villa, and he said he was “thankful for the reception I received … it was nice feeling to go onto the pitch and meet so many old friends”.

The following are comments made by other FC Barcelona players:

“It was a fair result. We had a lot of chances. We have earned three important and well-deserved points”.

“There is still a lot to do. This was an important win. We were facing one of the best teams in this league”.

“We appreciate this win a lot because it was against a great team”.

“It was an important game for us. It is nothing definitive but it was very important for what remains of the championship”.

“It is in our own hands. And we’ll aim to let that guide us. We have to avoid giving out any signs that we could let the league slip away”.

“The team that looked for and got the most chances is the one that won the match”.

“We are adapting well to the plans the boss comes up with. Our intention is to surprise opponents”.

“Quality players have to adapt as quickly as possible”.

“Third time lucky. He missed two that he would normally score and he was a bit annoyed. The last thing you want is for Leo to get angry”.

“There’s a lot still to do but these were three important points. It’s always hard to get a result here. This was an important challenge for us and we got through it by showing plenty of character”.

“We knew how difficult it would be. We created a lot of goalscoring chances, we had all the best ones”.

“It was an important win. They were very motivated because they’re on a good run. But Barça are good at dealing with difficulties and that was the case once again here”.

“Adriano was signed because of his qualities and what he contributes. We are very pleased with him”. 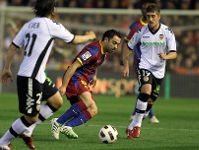 “This was a very good win. Points like these are what could win us the title”.

“There are still some difficult games to play. There’s a lot at stake. But we’re optimistic”.

“We are pleased with the team dynamic, the way we’re playing and the attitude”.

“Guardiola is in a bad way. But that’s how committed coaches and Barça people are”.

“I didn’t have any trouble even though the pitch was dry and hard”.