Mińo, Thiago i Montoya, a la llista per a Mallorca

Mińo, Thiago and Montoya in the squad for Mallorca

Barça will travel to Mallorca without the injured Valdés, Xavi, Puyol and Jeffren, or the suspended Alves. Therefore, Pep Guardiola has drawn on reserves Mińo, Thiago and Montoya to add to his first team squad of fifteen 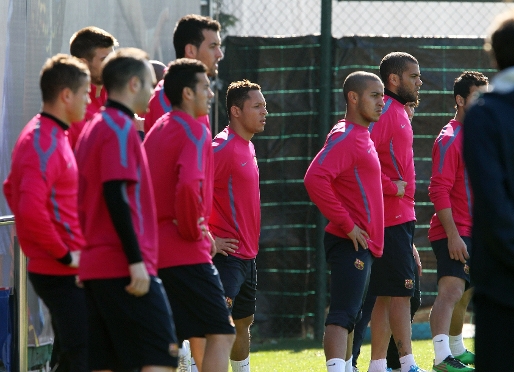 Pinto, Adriano, Abidal, Maxwell, Piqué, Milito, Mascherano, Keita, Sergio Busquets, Iniesta, Villa, Messi, Pedro, Afellay, Bojan, Mińo (31), Thiago (30) and Montoya (40).
Eighteen footballers will be on the plane for Palma de Mallorca to take part in the game that kicks off on Saturday at 20.00. But five of the usual FC Barcelona first team will not be among them. These are the injured Valdés, Xavi, Puyol and Jeffren, who are all receiving treatment, and also Dani Alves who was shown his fifth yellow card against Athletic Bilbao and misses the game through suspension. 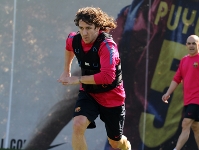 That’s why Pep Guardiola has been using Mińo, Montoya and Thiago in his training sessions this week, and the trio have all been given places in the first team squad.

The session was started on pitch number one at the Ciutat Esportiva, where it was nice to see that Jeffren was able to join his colleagues for the warm up section.

The players then moved over to pitch number two, apart from Jeffren, who stayed behind with a fitness coach. Puyol also appeared on the pitch for a short while, while Xavi and Valdés were elsewhere receiving therapy.