Messi back with the rest of the squad

Messi back with the rest of the squad

After missing Wednesday’s session to work in the gym, Leo Messi was today back training normally with the rest of the squad. B team players Thiago, Mińo and Montoya again trained with the first team squad. 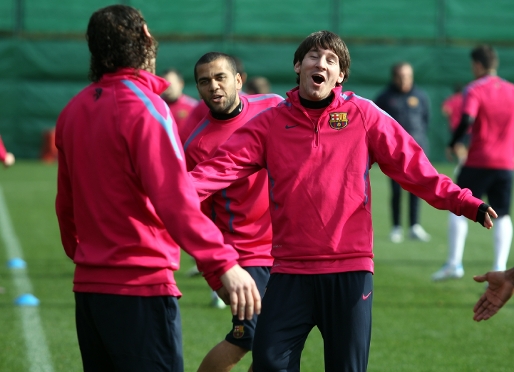 The squad’s next training session will be on Friday at 11.00 at the Ciutat Esportiva Joan Gamper. Josep Guardiola will hold a press conference after the session, ahead of Saturday’s game in Mallorca.
Josep Guardiola this morning held the second of the three training sessions the players will have before their next La Liga game against Mallorca on Saturday, with the welcome addition of Leo Messi, who joined the rest of the squad out on Pitch Number 2 at the Ciutat Esportiva Joan Gamper.

Puyol and Jeffren training on the pitch 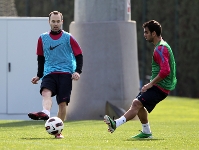 The injured Jeffren, Puyol, Valdés and Xavi were all absent, though Puyol and Jeffren were out training on the pitch, whilst Xavi and Valdes continued to receive treatment for their injuries.

The boss decided to call on the three B team youngsters who took part on Wednesday for today’s session - Martín Montoya, Rubén Mińo and Thiago Alcántara.