This morning, Sandro Rosell and Pep Guardiola signed the contract that will guarantee the services of the FC Barcelona manager until June 30, 2012. 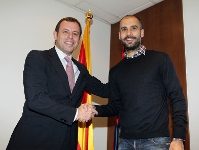 As a result of this agreement, Guardiola will extend his commitment to four seasons on the first team bench, which will make him the fourth ranked manager with most consecutive seasons with the first team, after Cruyff, Greenwell and Rijkaard.

Guardiola is synonymous with success

Over the previous two and a half seasons Guardiola has led the team to sporting excellence, with a total of 8 out of 10 possible titles. Moreover, this success has been achieved playing football with his personal stamp, which has won praise from all sides and has accumulated incredible individual and team records, the latest one being the record of wins (79) in his first 100 games in charge in the Spanish league. 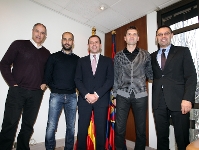 Guardiola, who was accompanied by his advisor, Joseph M. Orobitg went to the Club’s offices following the training session on Wednesday, the first one in preparation for the match against Mallorca at the weekend.