A man of his word

Guardiola, a man of his word

In his three seasons as first team manager, Pep Guardiola has witnessed a lot of magical moments that we’ll take a look at via his press conferences and statements. 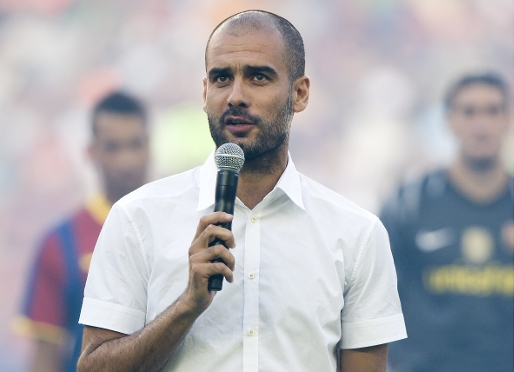 More info
17/06/2008 - Press conference at his presentation as new manager of FC Barcelona:
"I can’t promise trophies, but I’m convinced that people will be proud of us."

02/05/2009 - The 6-2 away win over Real Madrid:
"I'm very happy. It’s one of the happiest days of my life. To come here and play a great game like we have is not easy. I’m thrilled that tonight we have made so many people happy. It’s a tremendous feeling".

23/05/2009 - Celebration of the League and Cup double in the Camp Nou:
"We are in no doubt that on Wednesday we won’t let you down." (On May 27 the team would be playing the Champions League final in Rome.)

28/05/2009 - Celebration of the Treble with the fans in the Camp Nou:
"After what we’ve seen on the streets of Barcelona, you can’t imagine how great this stadium looks. I want to tell you three things: Firstly, that if we ever make fools of ourselves, I hope you’ll forgive us due to what we've achieved this season. Secondly, thanks to all my colleagues, and thirdly, I ask you to give a round of applause to these players. Oh, if you’ll permit me to say, ‘It’s here right now’!".

19/12/2009 - Press conference after winning the World Club Championship
"As I always have done, I want to thank the players for the months they have given us. They’ve played so well so often, pleasing everybody. I’ll never forget that they are the ones that made me what I am."

16/05/2010 - After winning the second consecutive League title, in the 99 point season:
"We owed that to the fans following our Champions League elimination."

29/11/2010 - Press conference after the 5-0 home win over Madrid:
"We’ll take this in our stride but we what we will do is enjoy this moment."
"Everybody has had a great time and that’s a testament to our hard work."

11/02/2011 - First press conference after announcing his contract renewal:
"I don’t want to dwell on past achievements. It wouldn’t be the same anywhere else, but we have to keep on winning."