Barça, a year unbeaten on the road

Barça, a year unbeaten on the road

Incredible but true. Following the draw against Sporting on Saturday, Guardiola’s team has gone a whole year without losing away from home. The last defeat was on February 14th 2010, when Atletico Madrid beat them 2-1. 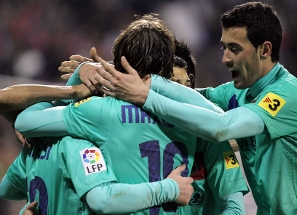 Mallorca and Valencia, next up

After the visit of Athletic Bilbao to the Camp Nou next Sunday, Guardiola’s side will have two good, but complicated chances to maintain their unbeaten record. The first test will be against Mallorca on match day 25, and they then have to travel to Mestalla to face Valencia.
Everything has its positive side and the loss of two points at Sporting also maintained the unbeaten record of the club away from home. It’s today, exactly one year ago that FC Barcelona lost their last game away from the Camp Nou. 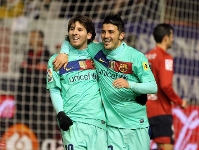 Atletico Madrid was the last team capable of beating Barça in a La Liga away game. On February 14th last season, in a match played at the Vicente Calderon, Forlan and Aguero gave Atletico a very early 2-0 lead and although Ibrahimovic pulled a goal back before the break, it wasn’t enough to secure the draw. 39 matches have been played since that game.

Goodbye to a fantastic winning run

Barcelona are still unbeaten away from home, but the draw against Sporting put an end to their fantastic run of victories. Before that, FC Barcelona had been on a winning streak, and had not dropped a single away point since April 17 2010, against Espanyol.