After a two month break, the Champions League is back this week, with Barça travelling to London to take on Arsenal. Guardiola will begin preparations with his squad for the game on Monday morning. 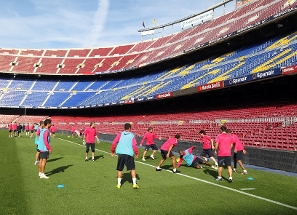 With the Spanish Cup on hold until Cup Final day -April 20th in Mestalla – Barça again turn their attention to Europe, as they prepare for their last 16 first leg game at The Emrates Stadium on Wednesday night.

After a well earned day off on Sunday, the squad will report back to the Ciutat Esportiva on Monday morning at 11.00. The first quarter of an hour of training will be open to the media and Pedro will hold a press conference after the session.

No training in London 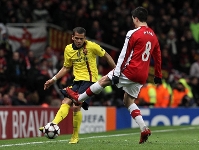 Normally the team would train on the ground they are set to play on, but this week, Guardiola will put his players through their paces at the Ciutat Esportiva at midday on Tuesday and after lunch, the squad will fly out to London at 16.00. The boss and one of the players will then hold a press conference on Tuesday evening at the Emirates.

In principal, the players will not step out onto the North London pitch until Wednesday evening and once the tie is over they will fly straight back to Barcelona. Thursday will be a day off for the squad ahead of Friday’s session, when they will begin to prepare for the game against Bilbao.

Three days to prepare for Bilbao

With the game against the Basques at the Nou Camp not scheduled until Sunday evening, the players will have three days to train, beginning at 11.00 on Friday at the Ciutat Esportiva. Saturday will see another session at the same time and the same place, with the squad’s final preparatory training set for midday on Sunday on the Nou Camp pitch.