Villa: “it was a thrilling game”

David Villa was naturally enough pretty happy with his goal on Saturday night, though he also explained: “Sporting managed to close down the players who create for us”. 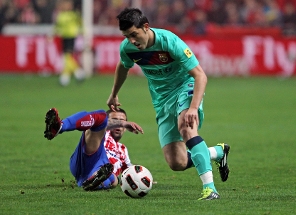 Day off on Sunday

The squad have Sunday off and will be back in training on Monday at 11.00 at the Ciutat Esportiva Joan Gamper .
After the game , Villa gave his take on the match: “Sporting managed to do what a lot of teams have been trying for some time – they closed down the players who create for us”. The Spain striker also made it clear that the midweek international games hadn’t affected the team: “there was no FIFA virus, it was very hard work for us because of Sporting, they played well and the draw was down to that rather than any failing on our part”.

Pleased with his goal

It was a special night in Gijon, for the Sporting fans as well as for the returning local hero himself and Villa explained: “it was a thrilling game and you have to give the home fans a 10 for the support they gave their team which made it much harder for us. I’ve got a lot of affection for the people here, but I’m a professional and I have to do the best for my team”. On an individual level, Villa admitted: “I’m pleased with my goal and that it gave us a point, but on the whole, we didn’t get what we came for and so that creates some mixed feelings”.

Below are the post match comments from some of the other players:

“The game was difficult after they went ahead. They drew back and made it hard for us to play and to get through”.

“We improved in the second half. We got the goal and with a bit more luck we could have nicked it. On the whole we did a good job though and that’s what we have to continue to do”.

“Every game is hard and winning is always difficult, even though we are used to it with this run of wins we’ve had. We took another point and we have to be happy with that”.

“The team worked hard and made a great effort”.

“We are trying to reach a deal (with the club for his contract renewal) and I hope it’s sorted out as soon as possible”. 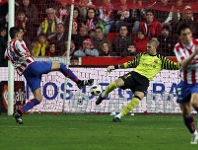 “It’s a pity we dropped two points here – they were very important for us. Now we have to turn our attention to Europe”.

“We had our chances, but we didn’t take them”.

“Sporting did what they had to do very well and that’s what this league is about. We just have to take it one game at a time”.

“It’s one point, it’s not what we wanted. We were better in the second half , but it didn’t feel good tonight”.

“The positives are that the team reacted and we made chances”.

“If you can’t win, it’s important not to lose and we’ll see at the end of the season how important that point was”.

“Now we have to focus on the Champions League”.

“We go to bed eight points ahead of Real Madrid –let’s see what happens tomorrow!”