All 18 available to travel to Gij¾n

All 18 available to travel to Gij¾n

Josep Guardiola has called up all 18 available first team squad players for the trip to Gijon tomorrow, with Puyol and Jeffren both missing as they recover from their injuries. 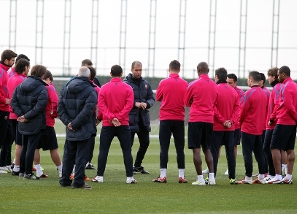 Valdķs
Pinto
Alves
Piquķ
Milito
Abidal
Maxwell
Adriano
Sergio Busquets
Mascherano
Keita
Xavi
Iniesta
Messi
Pedro
Bojan
Villa
Afellay
After all the internationals returned from their midweek commitments for training on Thursday, Guardiola again put the players through their paces this morning at the Ciutat Esportiva Joan Gamper. All 18 available players trained and they will all make the trip to Asturias to face Sporting on Saturday night. 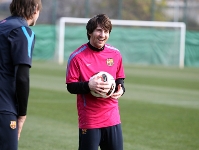 Puyol and Jeffren both continued with their treatment and worked out in the gym and Guardiola decided not to call up any youth or B team players, preferring to work with the 18 players he’ll be taking to Gijon. 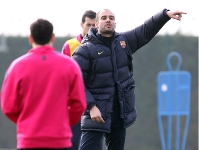 Dutch midfielder Edgar Davids, who played with the first team in the 2003/04 season, visited the session and spoke to Guardiola before training began, as well as chatting with various players, such as Victor Valdes.