Guardiola gets internationals back

Guardiola gets internationals back

After two days of training with minimum resources, Pep Guardiola was able to welcome back his international players today. Saturday’s league fixture with Sporting at El Molinón is top of his plans.

On Friday at 11.00 am, the players will all be back at the Ciutat Esportiva Joan Gamper for a session behind closed doors. When it’s over, Pep Guardiola will be giving a press conference.
None of the Barça players suffered any delays on their return flights, and were able to get straight back to work with their club colleagues. The session started at 6.00 on pitch number 2 at the Ciutat Esportiva. 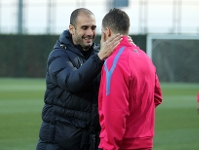 This was the first contact most of the players had had with Pep Guardiola since his announcement that he will be staying on for at least one more season , and so there were smiles all round as the whole squad expressed their approval by giving their coach a hearty round of applause in the centre of the pitch. There was even time for jokes, with Víctor Valdés inviting kitman Chema Corbella to join the circle. 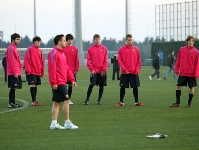 But then it was time to turn to the serious stuff and start training for the league fixture away to Sporting Gijón (Saturday at 20.00). The 18 first team players were joined in their exercises by a handful of players from the youth team, namely Deulofeu, Balliu, Espinosa, Rosell, Masó and Palau.

The only players that were absent today were Jeffren and Puyol, who are both still recovering from injury.