Due to international matches, only Pinto, Keita and Maxwell have trained today. Adriano, who is having a tooth extracted, was also missing, while eight reserve team players featured.

After two days off, the players were back at the Ciutat Esportiva Joan Gamper today. Pep Guardiola had to make do without 14 players that have been called up for international duty.

Pinto, Keita and Maxwell, but not Adriano 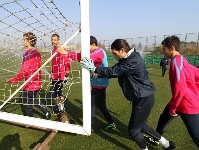 The venue was pitch number 2, where Pinto, Keita and Maxwell were the only first team players involved, as Adriano was also away having a wisdom tooth extracted.

The injured Carles Puyol and Jeffren Suárez were both around too, but today continued receiving treatment away from the field of play.

Given so many first team players were away, the numbers were made up by eight members of the Barça B squad, namely Víctor Vázquez, Nolito, Mińo, Muniesa, Batra, Ilie, Dos Santos and Tello. 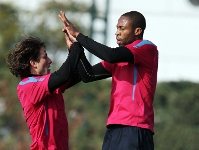 Back to work on Wednesday

Barça have another session on Wednesday at 11.00, which will only be open to the media for the first fifteen minutes, and no players will be giving press conferences afterwards.