With the Champions League clash against Arsenal on the horizon, Barça’s David Villa has warned: “we will have to very careful about Arsenal. They are a great team and can make things very tough for us”.

Last year’s stunning win and the Gunners’ calamitous draw against Newcastle on Saturday when they lost a 0-4 lead haven’t given any sense of overconfidence to the Barça squad and in an interview with Betfair, Villa insisted: “we are confident of playing a good tie and we could get through, but it won’t be easy as they are a good team with some great players. I’m sure they’ll make things very tough for us”.

David Villa is also clear where the main threat from Arsenal lies: “when you play a team of the calibre of Arsenal you have to keep an eye on all the players, but we especially need to stop Cesc, who is their best player and main reference point”.

The Spanish Cup Final is a little further away, but Villa, who won the title with Valencia in 2008 and Zaragoza when they beat Madrid in Barcelona in 2004 (his first ever title), is clearly relishing the chance to return to Mestalla, where the final seems likely to be played: “it’s a great ground where the fans are really close to the pitch. It’s also a place I have great memories of from my time with Valencia”.

“The league’s not over yet”

It’s the league title that is most immediate concern though and Villa is cautious despite the seven point lead Barça currently hold: “the competition finishes when we are mathematically uncatchable. We are in February and nobody wins anything in February. There’re still lots of work to be done and we still have to win a lot of points”. 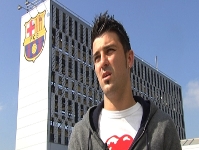 Since he arrived in Barcelona in July, Villa has been clearly very happy at the club and he explained: “I’m very happy indeed. I’m enjoying the day to day experience, especially because the team is playing at such a high level in all competitions. We hope we can celebrate plenty of things at the end of the season”.