Spanish League Round Up Week 22

Spanish League Round Up Week 22

Villarreal and Espanyol both lost to teams in the bottom three with Pochettino’s men slipping to sixth behind a rampant Bilbao and Valencia moving to within a point of Villarreal.

Llevant’s shock win at Villarreal and Almeria’s no less impressive defeat of Espanyol weren’t enough to get them out of the bottom three, but they dealt hefty blows to Villarreal and Espanyol’s ambitions, whilst Valencia and Bilbao took advantage to improve their European prospects and Seville’s goalless draw at home to Malaga suddenly didn’t look all that bad.

Villarreal lost their first game at home this season and Llevant won only their second on the road thanks to a second half Valdo goal and a performance which thoroughly deserved the points against a disappointing Villarreal, who failed to create many chances despite the reappearance of Nilmar up front. Almeria also played well for their 3-2 win over Espanyol for only their second victory at home, going three up in the first 20 minutes and withstanding an Espanyol comeback. Valencia closed to within a point of third spot with a comfortable 2-0 win over Hercules thanks to goals from Aduriz and Tino Costa, whilst Bilbao overtook Espanyol with their fourth straight win, beating Sporting, who played 75 minutes with 10 men after Gregory was sent off, 3-0. Bilbao are six points off the Champions League spots, but their boss Joaquin Caparros insists: “we are very very ambitious”.

With Atletico Madrid and Espanyol both losing, Seville had a chance to close in on sixth spot and establish themselves in seventh, but a goalless draw against Malaga limited their progress, with Manzano’s team overtaking Atletico Madrid, but Espanyol are still six points above them and a Champions League spot is a distant 13 points away. The other teams fighting for the seventh spot enjoyed mixed fortunes, with Getafe breaking a run of five games without a win by thrashing Deportivo 4-1, Mallorca earning a 1-1 draw against Osasuna and Real Sociedad losing to Real Madrid. Seville are now on 31 points, Atletico Madrid and Getafe on 30 and Mallorca and Real, who meet in Donosti in a fortnight, both on 28.

Tight in the basement

At the bottom, Deportivo, Sporting and Hercules were the only teams to lose and with Zaragoza and Racing drawing 1-1 at La Romareda, there are just three points separating Almeria (20 points) in 19th and Zaragoza (23) in 12th spot, with Malaga still bottom on 18. Sporting, Hercules, Osasuna, Racing and Deportivo, who’ve now failed to win on their last five games, are all on 22, a point ahead of Llevant on 21. 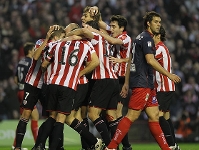 Real Madrid went into Sunday night’s game against Real Sociedad 10 points adrift of Barça, but two goals from Ronaldo helped them to a 4-1 win that took the pressure off them somewhat after last weekend’s defeat in Pamplona. Kaka and Adabayor got the other two goals, with the Togo striker getting his second for the team in two and a half games.