Hat trick hero Leo Messi insists that he’s more interested in the team’s collective success than in topping the goal scorers table – he currently leads the “pichichi” table with 24 goals.

After his fourth hat trick of the season helped see off Atletico Madrid, Messi moved to the top of the La Liga scorers table with 24 goals, but he made it clear that the important thing for him was the collective triumph more than any individual prize: “the last thing I’m worried about is winning the pichichi award – the important thing is to continue our winning run”. 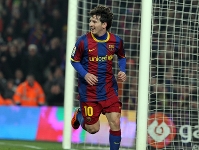 The win over Atletico set a new La Liga record of 16 straight wins and Messi expressed his satisfaction at beating the previous best set in the 1960-61 season by Real Madrid: “I’m proud that we have beaten the record set by Di Stefano’s Madrid - we have to enjoy that”.

Questioned about the Cup Final against Real Madrid set for April 20th, Messi insisted: “there’s still a long way to go and we are focussed on the league right now”. Messi also explained that he was “happy with another win tonight against a good team”.

Below are some of the post match comments from other players:

“We’re excited about the record . We are enjoying ourselves and winning too”.

“The aim is to win titles and we are on the right track”.

“There are still a lot of points up for grabs and we know how strong Madrid are. We just have to concentrate on our own game”.

“We are happy again because of the win and what’s more against Atletico, which is never easy”.

“The record is a difficult thing to do, especially in this league where there are so many strong teams. We just hope it continues like that –winning games!”

“We dominated and in the end we had a good win”. 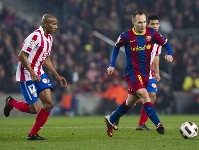 “It’s a lot of wins and a nice thing to live through. We have to value so many victories and points and keep it going to get to the end of the season with options”.

“Messi never stops surprising me and it’s important that he feels ok, because the team really notices it too”

“I’ve still got a bit of pain, because it’s only a few days since I hurt my back, but it’s not something that will stop me playing”.

“Let’s hope the run doesn’t come to an end and we get to the end of the season with our options still intact”.

“We did our job and beat Atletico –let’s see what Madrid do, but the important thing is that we keep on winning”.

“We like the fans to enjoy themselves and go home proud of us because that means we are doing the job well”.

“We are happy to keep piling up points and to take the record, though today we didn’t have all the control that we wanted, because they played a very defensive system”.

“We have to continue in the same way. The team is playing very well and let’s hope we can keep it up until the end of the season”.

“A rest is always welcome, but it’s good to be playing every three days because that shows we are still in all three competitions”. 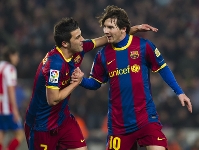 Next training set for Tuesday

With no midweek Cup games this week, Guardiola’s squad will not report back for training until Tuesday morning. The session will start at 11.00 at the Ciutat Esportiva Joan Gamper and the first 15 minutes will be open to the media, though there will be no post training press conference.