Barça were the winners in Zurich. As well as the nominees and their families, directors, players and coaches past and present plus less known members of the youth structure were there to represent the club on a historic day for all.

People from all walks of the were in Switzerland to attend the FIFA Ballon d’Or gala 2010. Some were unable to attend, because they were at the funeral for former player Ángel Pedraza. But there were still plenty of Barça folk in Zurich to turn the venue for a day into something resembling a mini Camp Nou. 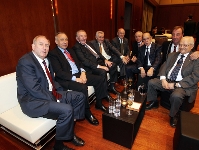 Almost all of the current directors, led by president Sandro Rosell, were in attendance. Agustí Montal was the only former president that also attended. By the impressive entourage of former coaches included ‘Charly’ Rexach, Radomir Antic, Llorenç Serra Ferrer, Terry Venables, ‘Quimet’ Rifé, Tońo de Cruz and Josep Lluís Romero, who have all done their bit to create the magnificent club we know today.

It all made for around a hundred people in representation of Barça. There were even two previous Ballon d’Or winners in Hristo Stňitxkov and Luis Suárez. Switzerland is, of course, the country of club founder Joan Gamper, and many locals made their way to Hotel Hyatt Park in Zurich, where the Barça group was staying, and the Zurich Kongresshaus, where the gala was held. 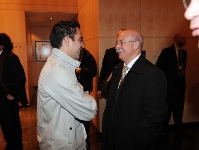 January 10, 2010, will go down in club history as the day when Barcelona’s amazing repercussions were sealed in stone. It was plain to see on Monday that Barça is more in fashion than ever, and it was a chance for the world to celebrate the amazing achievements of recent years. 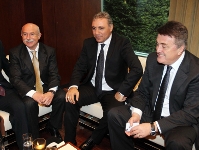 Three members of the Barça backroom staff were also there to enjoy the ceremony. These were Paco Seirul•lo, delegate Carles Naval, and materials manager Josep Maria Corbella, three men who have been at the club longer than almost anybody. And of course, there were the current players (Messi, Iniesta, Xavi, Piqué, Puyol y Villa) and the current manager Pep Guardiola, who were delighted that the unsung heroes of the club were honoured alongside them.