Leo Messi, winner of the Ballon d’Or 2010, wanted to share the honour with his two Barça colleagues Iniesta and Xavi.

Barça was the real winner. Leo Messi, Andrés Iniesta and Xavi Hernández stood together in Zurich as they listened to the words of their manager, Pep Guardiola, as he announced the name of the winner. Ultimately, it was Messi who took away the FIFA Ballon d’Or 2010 but he only narrowly pipped Iniesta and Xavi. The surprised Argentinian dedicated his award to “my colleague and all Barça fans”.

It was the high point of the night. Minutes before, Gerard Piqué, Carles Puyol and David Villa had come on stage as members of the ideal XI of 2010. FIFA’s annual gala honoured Barça as the team of the moment, with six members of the world eleven.

Dedicated to Xavi and Iniesta 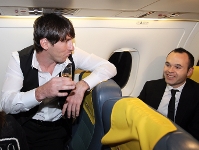 After all the excitement, there was plenty to celebrate as the group made their way back to Barcelona. The group was split across two aeroplanes, with directors and guests on one and players and friends on another. Leo Messi was the focus of all attention on the latter, but he said “I want to dedicate this to Xavi and Iniesta, and although I won the award, they deserved as much if not more. This is for them” he said amongst much applause. 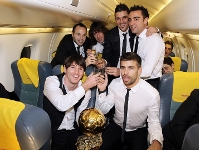 Iniesta and Xavi, standing behind him, accepted his words with a smile and thanked the two-winner for the noble gesture. The three posed together for yet another picture of Barça success and were then joined by the other three FCB players in Zurich. The winning plane touched down at El Prat airport just before midnight, and the radiantly smiling group made their way home after a fun-packed day in Switzerland. 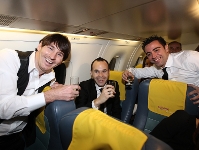