It’s hard to pick 12 of the best moments from a marvellous 2010 for Leo Messi, but below are certainly 12 unforgettable events in an unforgettable year.

- 14 March: Three more at the Nou Camp against Valencia, all in the second half.

- 17 March: Two more goals against Stuttgart in the return game of the last 16 of the Champions League (4-0).

- 6 April: Messi makes history with four goals in the win over Arsenal in the 4-1 win in the Champions League quarter -final, goals that also brought him level with Rivaldo as the Club’s leading European scorer. 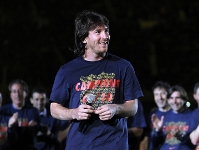 - 16 May: Two goals in the 4-0 win over Valladolid that gave Barça the La Liga title. With 34 goals, Messi is the competition’s leading scorer.

- 22 May: Confirmed as Champions League leading scorer with 8 goals.

- 21 August: A hat-trick helps Barça come back from their first leg defeat to beat Seville in the Spanish Super Cup final.

- 30 September: Receives the Golden Boot, the second Barça player after Ronaldo to do so. 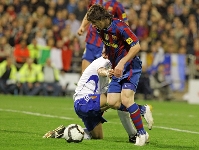