Messi’s award rounds off a marvellous 2010 for him, in which he’s scored 58 goals in 54 games. It’s the second Ballon D’Oro on the run for the Argentinean, who has led Barça throughout a year of records.

Leo Messi continues to pick up individual awards after taking the Pichichi and Golden Boot trophies, as well as leading Barça to their fantastic 99 point La Liga win and the potentially even more outstanding campaign this season.

As well as the goals he’s piling up in La Liga(19 so far), Messi is creating more than ever and it’s not just the 58 goals he scored last year, but also the fantastic assists he contributed that have won him this year’s award. With Messi on the pitch over the last year, Barça have won 76% of all their games. 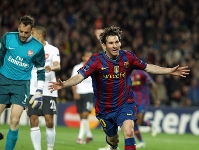 In 2010, Messi confirmed his position as a second striker, lying deep behind the frontman, after moving inside from his winger’s spot and scored four hat-tricks as well as four goals against Arsenal that thrilled all Europe. The only low point was the World Cup, when even though he put in some great individual performances, he went out in the quarter finals with Argentina.

Messi’s second Ballon D’Oro takes him level with such legends as Rummennigge, Keegan or Beckenbauer, but his speed, technique and strength mark him out as a modern player, even though he maintains the same humility he showed when he first came to La Masia in 2000. 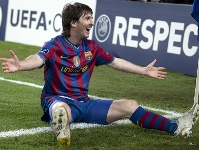 Leo Messi has also equalled Johan Cruyff’s record of two Ballon D’Oro awards as a Barça player and his record over those two year speaks for itself.: 96 goals in 108 games.