Six Barēa players have been chosen as part of the FIFAPro World XI 2010. The club provides more than half the team, with Puyol, Piqué, Iniesta, Xavi, Messi and Villa all selected.

The announcement was made during the ceremony for the FIFA Ballon d’Oro held in Zurich this evening.

With the Ballon D’Oro already decided as going to a Barēa player, the announcement of the Club’s dominance of the FIFAPro World XI merely confirmed the hegemony of Barēa’s wonderful philosophy of football.

On stage surrounded by the other selected 10 players, Gerard Piqué put his finger on the key to the Barēa players’ success, commenting: “when we are on the pitch you can see the good relationship we all have between us”.

Since 2009, FIFA and FIFPro have organised a secret vote amongst more than 50,000 professional players from the players unions throughout the world to decide on an ideal XI.

This year’s eleven players chosen were: 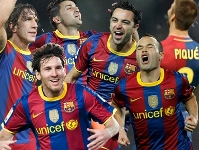 Last year was the first time that the FIFAPro World XI had been chosen and Andrés Iniesta, Xavi Hernįndez, Leo Messi and Dani Alves were all picked, with the first three repeating the honour this year.