Pep Guardiola has revealed that all the youth players that have been participating in pre-season will begin the new campaign with their respective teams at FC Barcelona.

Speaking after the Trofeo Joan Gamper reverse against Manchester City, the Blaugrana coach explained that he was delighted with the level and ability that all the starlets had shown and that he would continue to give them opportunities at the highest level. With many having travelled to England and the United States in the last few weeks, they were also chosen for the Gamper outing.

"I am very pleased with their performances," Guardiola told the media after the City game. "Even playing with so many youngsters against a team with the quality of Manchester City, we have held our own. We are lucky to be able to field so many of our own homegrown players. But they will all begin the season with their own teams." 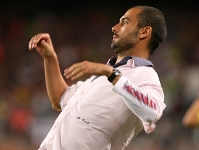 Regarding the Gamper match Guardiola confirmed that the aim of the home team was "to win the game and the trophy", but that none of the players should "be looked at too closely" because now the focus was turning towards the second leg of the Spanish Super Cup on Sunday." I made many changes and the youngsters responded very well," the trainer stated. "I also gave some time to players that have not played much due to injuries."

One of the highlights of the evening was the debut of Zlatan Ibrahimovic and Lionel Messi going on as a substitute. One the Swede Guardiola asked for patience as the player recovers from his hand injury and said: "He has come here for four or five years, not just for a day."

He continued: "I gave Ibra a few minutes because he is lacking in match practice and we will see what we will do about Sunday. The thing is that slowly but surely he is gaining an understanding with his team-mates. The best way to find your rhythm is by playing and he has now started. He has gone for some time without playing, but until two days ago he had not been given the green light to. It all takes time. He moved well and I am pleased with him."

On Ibrahimovic's link-up with Messi, the Barça boss explained: "I imagine that they will play a lot together and I wanted to given them some minutes together. But it is not just them who play as the whole team must perform. We will try to ensure that everything works with them and not just them together." 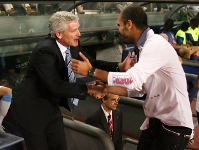 Laporta: "The challenge is the continuity of success"

Joan Laporta was clear about what the club's aims for the 2009/10 season are as he wants to see the team to continue to strive for more and more success. "The challenge is to continue on this successful path," he said. "Everyone has to continue working and continue to be motivated in order to achieve that."

The Camp Nou had a party atmosphere to it on Wednesday for the visit of Manchester City in the Trofeo Joan Hamper and despite the defeat, the 94,123 spectators enjoyed themselves, "It was a great spectacle with a ful stadium," Laporta continued. "Manchester City took advantage of their chance. We had some opportunities of our own and hit the woodwork, but we have to recognise the other team's triumph."

Ahead of his last season as president of Barça, Laporta stated that he "has the same desire as I had on the first day". In that sense, the Blaugrana chief thanks the club's delegates for the confidence that they showed him last year and also that they have done so this summer at the Assembly that was held also on Wednesday. "We will be able to give the next president a better Barça than the one that we took over," he concluded.