Ibrahimovic: “I’m trying to pick up the rhythm”

Ibrahimovic: “I’m trying to pick up the rhythm”

The Swedish striker’s much awaited debut took place in the second half of the Joan Gamper Trophy match between Barça and Manchester City.

Zlatan Ibrahimovic has played his first minutes in the Barça colours: “I wanted to score. I’m angry I missed two chances but I’m not getting obsessed and I only want to pick up the rhythm”.

“I played 45 minutes and I tried not to think about my hand injury. It affected me a bit but I play with my feet not my hands”, he joked. “I’m trying to pick up the rhythm”. 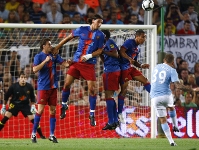 “Every player is important for us and we always have to rely on the players we have. We hope our injured team-mates make a quick recovery”.

“You have to give the youngsters time to adjust to top level competition. They’re quality players and can give us a great deal. They’re Barça’s future”.

“I’m feeling better every day. I’m trying to do what the coach asks. The atmosphere and the group make it easy. It’s fantastic”.

“Zlatan is a great player who attracts everyone’s attention because of his quality. We are expecting great things of him and I’m sure he’ll do a great job”.

“We’ve played with quality players from the Club’s academy. It’s good for everyone that the youngsters get the chance to play because they’re doing very well”.

“I’m taking it slowly. I’m training and taking my chances”.

“We should be very happy because another coach wouldn’t even know us and Guardiola gives us confidence and the opportunity”.

“I’m surprised to continue in the senior squad but I’m very happy”.

“It’s the preseason and we still lack rhythm. We also played with reserves but as soon as we get going the team will gain rhythm”.

“We keep in contact with our team-mates in the reserves. The other day we went to watch a training session and today we were at the match they played against Hospitalet”. 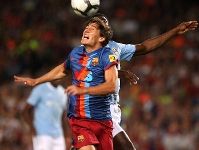 “Under normal circumstances it was a match to win. We were unlucky not to score and we lost the trophy”.

“This team is used to winning whatever the match and if you lose you get angry. But it’s OK. Now on Sunday we have to clinch the Super Cup”.

“For another year the fans are inseparable and I’m very grateful. It’s a big help for your confidence to see that the fans love you and recognise your work”.

“All the conclusions are positive about the team’s performance and the chances we had. But the ball didn’t go into the net”.

“In the reserves there are some very good players, for example Jonathan Dos Santos”.

“As a little boy I dreamed of playing here and now the dream has come true”.

“The confidence Guardiola has in us is really good. He doesn’t put us under any pressure. He tells us to do what we know how to do on the pitch and luckily things turn out well”.

“I’m a Barça Atlčtic player and I know that I can go back to the reserves at any moment”. 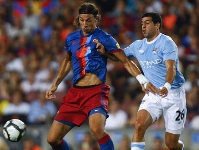 Dani Alves was asked about Brazil’s match against Germany in the first week of September. He’s hoping it won’t stop him from playing the first league match against Sporting in the Camp Nou on Monday 31st August: “I think I’ll play here and then leave”.