Josep Guardiola has called up all his available players for the trip to Milan, with Barca Atlčtic defender Andreu Fontŕs also making the trip and Andres Iniesta and Chygrynskiy the only absentees.

The 20 players making the arduous coach trip to Milan, include Éric Abidal, who has still not been given the medical thumbs up to play. 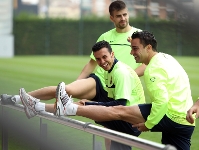 The squad trained in Barcelona this lunchtime – the final session before setting off for Milan for Tuesday’s Champions League semi-final against Inter.

After the goalless draw against Espanyol, the players trained under Guardiola’s orders today with their focus fixed on the European challenge in Milan. The whole squad, with the exception of the injured Andrés Iniesta and Lionel Messi, who worked out in the gym, took part in the session.

As has become normal on such occasions, Guardiola called in two Barca Atletic players – keeper Rubén Mińo and defender Andreu Fontŕs –for the session, which was held behind closed doors at the Ciutat Esportiva Joan Gamper.

Most of the session was dedicated to warming down from last night’s game, whilst those players who didn’t feature did some ball work, using the kind of ball that is used in the Champions League. The aim of the session was clearly trying to get the players back and ready for Tuesday’s game. 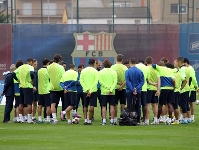 Next session in Milan on Monday

The squad will train on Monday at 19.00 in the Giuseppe Meazza Stadium, before which Guardiola and one of the players will have a press conference.