Half the Barça squad will be away on international duty this Tuesday and Wednesday although only Jeffren, named in the Spain under-21 squad, has been called up for a competitive match.

Josep Guardiola will have to wait until Thursday to reunite his squad to prepare next Saturday’s league match against Almeria. International matches on Tuesday and Thursday, most of them friendlies, have left the manager with a skeleton squad.

Wednesday’s friendly between France in the Saint-Denis stadium will bring together the biggest group of Barça stars - Henry for France and Xavi, Sergio Busquets, Piqué, Puyol and Iniesta for Spain.

Meanwhile, Dani Alves will join up with the Brazil squad for a friendly against Ireland in Arsenal’s Emirates stadium in London on Tuesday.

Leo Messi flew out to Germany on Sunday to link up with the Argentine squad. On Wednesday they take on Germany in a friendly match in Munich’s Allianz Arena.

Márquez and Dos Santos jet off to USA

Only Márquez and Jonathan Dos Santos have been forced to travel outside of Europe for their international commitments. Mexico will take on New Zealand in Pasadena (USA).

Jeffren Suarez is the only Barça play to be involved in a competitive match, the rest all taking part in friendlies. He will represent Spain uner-21s in a European qualifier against Liechtenstein. 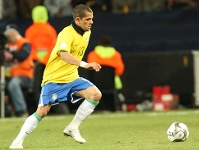 Touré Yaya’s Ivory Coast have a friendly against South Korea at the Loftus Road Stadium in London. However, the midfielder will miss the match as his country’s FA have failed to obtain a UK visa in time.